Ripsaw Ridge is another popular Gore traverse, tagging many of the “alphabet” peaks for which the range is known. I did it by accident today, having mis-aimed on an attempt to climb nearby Powell and Eagle’s Nest. While there was a lot of easy going, this is a long ridge with a few 4th class sections and a lot of scrambling. The path of least resistance usually stays near the crest, and the scenery is excellent. There are also several opportunities for escape if the weather turns bad.

The turnoff to Knee-knocker Pass is always easy to miss, and even easier to miss this year, since a large tree has fallen across it near where it diverges from the Upper Piney Lake trail. Since I was mostly tuned out, listening to a podcast while putting in forested trail miles, I completely missed it. Around this point, I met another peak-bagger named Layne, out to climb peaks G and F, who informed me that we had probably passed the junction. I didn’t remember anything about the traverse other than that it was no harder than easy 5th, but figured I might as well do that.

We hiked along together for awhile next to Piney Creek, squelching miserably through the dew-soaked grass and bogs, completely soaking my shoes and pants to the knee. We eventually emerged from the trees on a granite hump near Upper Piney Lake, where we went our separate ways. I chose a likely-looking avalanche chute up to the ridge, and managed to mostly avoid bushwhacking, reaching the ridge on a combination of grass and talus.

I immediately I was too far south: Peak G is the high point of the ridge, and I could see several higher points to my north. There was another point a short way to the south, but I didn’t feel like making a detour. Making my way north, I reached a cairn built around a USGS benchmark labeled “Black ET” and the remains of a broken jar. This might have been Peak H.

From “Black ET,” I passed over and around several bumps and ridges, making my way to Peak G’s obvious summit, gaining my first clear view of the (possibly dead) glacier in the cirque to its northeast. I soon found the first crux of the traverse, a bit of 4th class downclimbing getting off G’s summit.

The traverse across F, E, and D was a fun mixture of class 3 scrambling, boulder-hopping, and tundra-walking. I found the only register canister of the day on E, containing an amazing CMC log from 1948, with only a few pages filled. I was pleased to see an entry by Ray Northcutt, who did the first ascent of the Diagonal on Longs with Layton Kor. Making my way up D, I saw Layne (presumably) on the summit of G, and shouted, though I doubt he heard me.

Somewhere between E and D, a part of PDQ Bach’s joke song got stuck in my head. As a service to my readers, here are the jokes:

There was a bit of trickiness getting into the notch between D and C’, then some fun scrambling up the broad face to the subpeak’s summit. Getting off C’ was the next crux: I descended the west side of C’ to the gully between it and C, where I was stymied by cliffs. I retraced my route a bit, took an ascending ramp around the north side, and found my way down one of several steep, outward-sloping ramps on the east side. From the notch, it was smooth going to C’s summit, which I reached a bit over 3 hours after first gaining the ridge, 6h30 from the trailhead.

I suppose I could have continued on to Powell and even Eagle’s Nest (B and A?), but I was out of food, Powell’s south ridge looked unpleasant, and the descent to Knee-knocker Pass looked non-trivial. This turned out to be the case, as the route sometimes descended the ridge itself, and sometimes gullies to the left, crossing between them when they cliffed out. Through a mix of experience and dumb luck, I found a way that worked with only one short back-track. I saw a small cairn at an especially non-obvious crossing, but otherwise found no human signs.

Rather than going all the way to the pass, I slid and picked my way down the loose, steep gully to its south, raining rocks on anyone foolish enough to be climbing it. The use trail to the pass is mostly in remarkably good shape, though it disappears crossing some clearings, and is well-hidden by the aforementioned tree. Feeling energetic and impatient, I jogged a lot of the trail back to Piney Lake, reaching the car in 8h30. 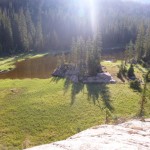 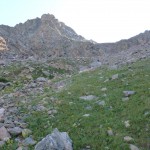 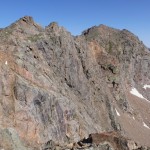 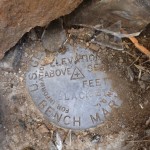 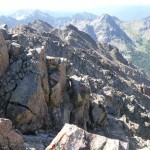 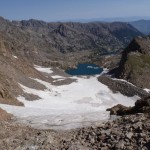 Glacier and lake to the NE 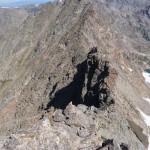 North along the traverse 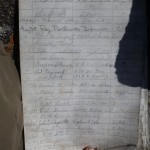 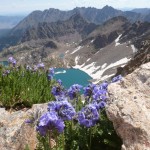 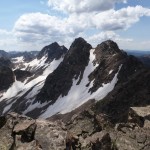 South to G from D 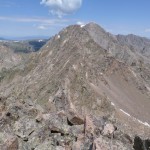 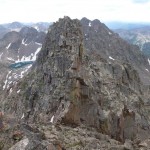 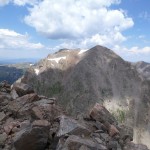 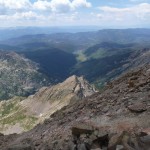 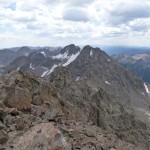 South along ridge from C 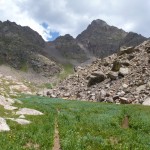 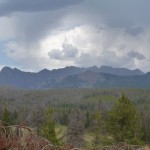