Impressions of the Wind River range

In addition to tagging a few signature peaks, I spent a few days in the Winds on failed peak-bagging, which could also count as successful sight-seeing. While I hardly know the range after five trail days and maybe 120 miles, I at least have an impression from three trailheads: Green River Lakes, Elkhart Park, and Big Sandy.

The Green River Lakes trailhead is about 50 miles from Pinedale, relatively low (8040 feet), and far from any peaks. The most prominent peak in the area, and the obvious climbing target, is Squaretop, which has a class 2 route up the “back” (southeast) side from Granite Lake. However, I got a late start and underestimated the distance involved — 10 miles to the Granite Lake turn-off, and perhaps another 3-4 from there to the summit — and ended up going for a scenic hike-run along the Green River. The river is well-named, being the milky green of the glacial lakes from which it flows. The trail is well-maintained, but sees an unfortunate amount of horse traffic. It’s a nice area, but an expensive drive for long approaches via a single trail.

Elkhart Park provides access to Titcomb Basin and Gannett, and while the hike is long, the trailhead is only 10 miles from Pinedale, all of them paved, and the trailhead is a pleasantly high 9300 feet. The trails leading to Titcomb are popular, but see relatively little horse traffic. The peaks are often glacially carved on all sides, and are home to significant glaciers, making them both aesthetic and interesting for a scrambler-slash-peak-bagger like myself. I will definitely return. 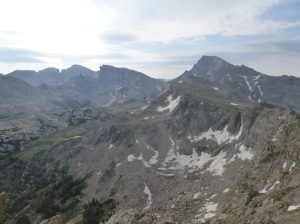 Big Sandy is nearly 60 miles from Pinedale, the last 10 on a passenger-car-compatible but rough dirt road. It is the access point for two main approach trails: the Big Sandy trail to Big Sandy Lake, leading to the Temple Peak area and the Cirque, and the Fremont trail past Marm’s and Dad’s Lakes, leading to Bonneville, Raid, and Ambush. Both of these trails see an unfortunate amount of horse traffic, and the Big Sandy trail is mobbed with backpackers and climbers. There are few glaciers in the southern Winds, and most of the peaks have only been glacially carved on one side. This makes them appealing to rock-climbers, with 5.10 and harder routes on one side and walk-offs on the other. However, I found them less scenic than the northern peaks, and many ridge traverses are uninteresting walks on talus and grass. I might return to climb Bonneville, Raid, and/or Ambush, but the long drive and the crowds make Big Sandy less appealing than Elkhart Park. 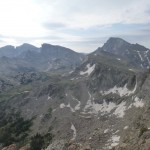 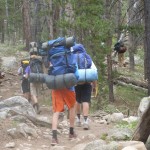 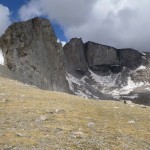 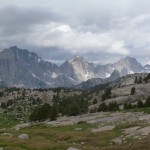 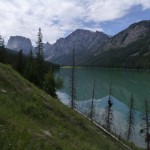 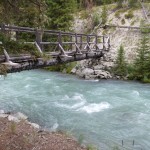 Bridge over the Green 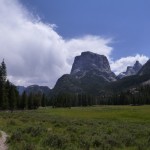 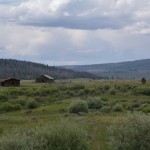 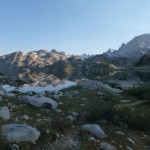 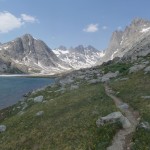 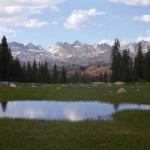