The Big Sandy trailhead is nearly 60 miles from civilization (Pinedale), many of them dirt, so I planned to amortize the cost of gas over a few days’ peak-bagging. The obvious prizes are all in the Cirque of the Towers, but there are some other trails out of Big Sandy, so I could avoid too many repeated approach miles.

Unfortunately, after two days of fatigue, afternoon rain, and downward-spiraling morale, I had little to show for my efforts besides some long hikes. Both started with wrong turns in the trail maze. The first ended with a nap on Schiestler Peak, the second with a rain-induced retreat off an uninspiring ridge. (Since most ridges in the southern Winds are glacially cut on only one side, most traverses consist of walking on a grassy slope bordered by a cliff.)

On the third day I had my dessert, making the 9-mile trek past Big Sandy Lake and over Jackass Pass to the Cirque of the Towers. The pass is rarely steep, but the trail meanders around boulders and across slabs, and can be rough in places. Amazingly, horses regularly use this route, as they (unfortunately) do many others in the southern Winds. The trail finally passes under Warbonnet’s east face, then crosses either the right (wrong) or left (right) gap into the Cirque.

The Cirque of the Towers and the National Outdoor Leadership School (NOLS) are the main reasons people come to Big Sandy, so I was not surprised to find a minor tent city below the cliffs, including a significant NOLS suburb. I saw them off and on the rest of the day, first standing around their camp for hours, then hiking around the meadows and talus in helmets, then finally splitting up to climb Overhanging Tower and Pingora.

Some Cirque peaks, like Warbonnet and the Warriors, are typical of the southern Winds in having out-of-my-league climbs on one side and walk-ups on the other. Shark’s Nose is convoluted 5.6 by its easiest route — something I would only do on a very good day. I chose two iconic peaks with 5.easy routes down and classic 5.6 lines up, nearly ideal for my interest and current ability: Pingora, up the south ridge and down the east ledges, and Wolf’s Head up the east ridge and down the west face.

I followed a well-worn trail and a series of ramps and ledges to Pingora’s south shoulder then sat around for awhile watching the NOLS camp and psyching myself up before putting on my rock shoes and getting down to business. Not having soloed 5.6 in awhile, I was nervous at first, but soon got my head in the right place. The line follows a series of cracks in corners mostly right of the buttress, passing two perfect belay ledges. There are not many face holds, so the climbing is a mixture of stems in corners, jams, and liebacks off the sharp edges of the cracks. The difficulty is fairly sustained, but I didn’t find the line particularly interesting.

From the summit, I got a better view of Wolf’s Head’s east ridge, and it looked frightening enough that I was tempted to call it a day, but decided to at least check out the approach. I switched back into running shoes for the descent, down an obvious series of ledges and flakes, with only a couple tricky sections.

Kelsey mentions two approaches to the base of the east ridge, recommending an ascending traverse on grassy ledges, except when they are wet. I foolishly took the wet ledges, but made it to the start of the route without any mishaps. I took somewhat longer to mentally prepare for this climb, finally resolving to “just go check it out.”

I’m glad I did, because this is an amazing route. It requires many types of climbing, and features just about every kind of exposure, from catwalks and knife-edges, to outward-sloping slabs, to hand-traverses with thin feet and a foot-traverse with no hands. Other than a short stretch passing the second tower, nothing felt treacherous, but there was lots of big air.

The ridge starts with a catwalk, then steepens through some cracks in a face on the ridge’s spine. The patina on the face provides enough hand- and foot-holds to keep the climbing moderate. Passing the first tower, you traverse under a block to the south, then pass through the ridge via a chimney narrow enough that I had to remove my tiny pack. From here, the route generally follows the path of least resistance, which includes numerous hand-traverses with thin feet and good sharp cracks, and one long, memorable foot traverse in a crack across a smooth face.

From the summit, I watched a NOLS party making its way up Overhanging Tower, then descended the west face to the col between it and Wolf’s Head. Though this route is rated 5.0 (vs. Pingora’s 5.2 walk-off), I found it more challenging and harder to find. Fortunately, this being popular climb, I could follow the bits of footpath and rappel stations. Overhanging Tower would have been a short, moderate climb from the col, but I felt that I had done enough for the day. I quickly descended to the lake, found the climbers’ version of Jackass Pass, and put myself on autopilot for the hike/run back to the trailhead. 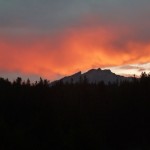 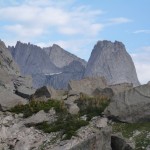 Wolf’s Head (l) and Pingora (c) from near Jackass Pass 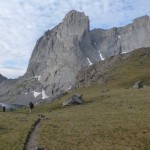 Warbonnet from the pass 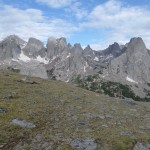 Cirque from the pass 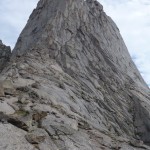 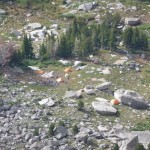 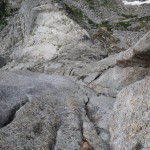 View down the south ridge’s cracks 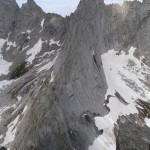 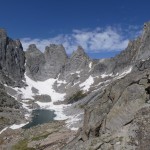 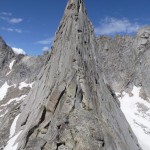 Wolf’s Head from start of route 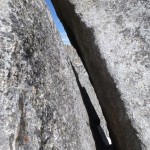 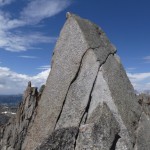 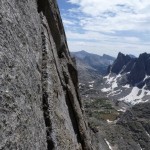 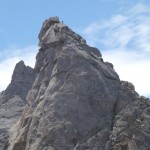 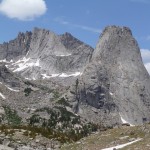