After an easy day on Buck’s east ridge (similar to the East Face, my first Tetons climb two years ago), I was ready for something a bit longer and more challenging. Adam wanted to summit the Grand, and I wanted to climb the Petzoldt ridge, whose window I had admired from the Exum ridge last year, so we had a plan. We loaded up with rope, rack, and insufficient food, and set off at 4:30 on what was predicted to be a perfect climbing day.

Unlike my last time up Garnet, the snow was in perfect crampon condition, and we made the Lower Saddle in 3h30 despite taking Burnt Wagon Gulch and carrying heavy climbing gear. It was calm by Lower Saddle standards, and while cold, still warm enough to make climbing possible. After reaching the Black Dike and chopping some steps across snow on the traverse, we started up what we thought was the Petzoldt ridge.

Things started out 3rd class, then turned 4th and low 5th, including a short, steep chimney that demanded caution and frigid gloves-off climbing. After more 3rd and 4th class scrambling, things got steep enough that we decided to rope up. Adam led the first pitch, and I led the second, which was mostly easy with a more difficult finish.

Topping out, I realized we were actually on the Exum ridge, having just climbed the bottom two pitches which Keith and I had missed last year. After some indecision, we decided to go ahead and do the rest of the ridge, which is about the same grade and length as the Petzoldt. Adam hadn’t climbed it, and while it was not new to me, repeating the route was preferable to bailing, and it was too late to retreat and start up the Petzoldt.

Adam led the third pitch, a steep climb to the bottom of the awful v-shaped off-width chimney. It was steep with a few dicey moves, but there were usually positive holds to be found. I fared about the same as last year, so while my climbing is not improving, at least it hasn’t deteriorated.

I had the honor of leading the off-width, which caused me all sorts of misery last year. After placing two dubious pieces, I slung a chockstone and began trying to writhe through the crux. To move up, you have to get out of the crack a bit and use small, sloping feet on the left wall. After several minutes of un-success, I retreated, dropped my pack, and grabbed my ice axe. With the extra reach, I easily hooked a chockstone, leaned back, and walked up the wall. From a stance above, I lowered a cordelette to haul both our packs, then chimneyed up the final section to the belay ledge at the base of the Black Face.

Adam led the Black Face, using every piece of gear to run it out half-way up the next pitch to a broad, flat belay ledge. I followed, finding the climbing at least as difficult as last year, then led the final half-pitch to where the route joins the Upper Exum ridge. Exhausted psychologically more than physically, I placed frequent protection and climbed slowly.

We agreed to put away the gear and solo the rest of the ridge. This was my third time on the Upper Exum, and while I found it familiar and mostly routine, the few balancy moves on the friction pitch didn’t seem to get any easier. Adam, having run out of food and water, was moving slowly at this point, so we didn’t reach the summit until nearly 5:00 PM. Fortunately the days are long and the weather was perfect, so we enjoyed pleasant conditions and good views before going in search of the rappels.

After doing the semi-useless upper rappel, we followed boot-tracks to the bolted lower one. Though a sign by the bolts says it is a 40-meter rappel (requiring 80 meters of rope), Keith had informed us that, by staying to the right, it can be done with a single 60-meter rope. Hoping I wouldn’t find myself dangling, I stepped off and scrabbled right however I could. After freeing the rope where it had caught in a couple of places, I was pleased to see that the ends reached the ground with about a meter to spare.

Finished with the day’s difficulties, we put away the rest of the gear and began the long slog back to the ranch. The only food we had was an apparently-unopened package of soft cheese found between the Upper and Lower Saddles, and the glissades down to the meadows were shaded and hardening, so it was a grim slog down. Still, with the help of two climbers’ trails cutting the switchbacks down from Garnet Canyon, we made it from summit to ranch in a bit under three hours, for a 15-hour day. 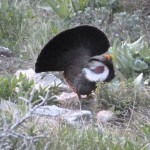 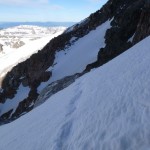 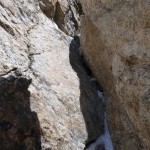 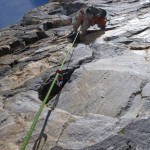 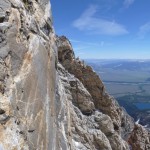 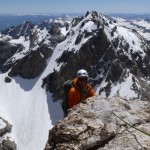 Topping out on Wall Street 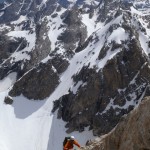 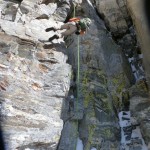 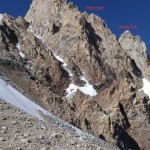