(This is out-of-order, but the previous day is harder to write up.)

St. John is the peak north of the Grand Teton that looks like a row of leaning books. While it is not a particularly exciting climb by itself, it can be combined with neighboring Rockchuck via a purportedly class 4/5.1 traverse and a trail loop down Hanging Canyon to the Jenny Lake trail. After trying out my technical ice skills the previous day, it was good to return to my roots: scrambling moderate rock on an obscure peak; carrying sandwiches, fish, and minimal gear; wearing running shoes, wool socks, and bread bags.

I got started around 5:20 AM, running into a couple of others from the ranch at the trailhead. They followed at a distance as I circled around the south end of String Lake, then took off cross-country toward Rockchuck’s east cirque. Cross-country travel in the Tetons can be awful below timberline (e.g. Moran), but the approach to Rockchuck was all sparse sagebrush, with an intermittent use- or game-trail.

I reached the snow around 6:40, to find it already softening, but hard enough for my running-shoe crampons to still be useful. As I headed southeast up the steeper snow to the ridge, the snow turned to slush, and the day’s postholing began. Fortunately, I was able to connect areas of exposed talus and rock to minimize the difficulty; the scramble along the ridge to the summit was almost entirely rock.

After eating and examining Moran’s impressive south buttress (and chucking a rock, of course), I set about the business of finding a way down the steep, serrated ridge toward St. John. While the ridge was probably not much harder than its 5.1 rating, the 5.1 came on a downclimb, and much intricate route-finding was required to keep the climbing at that grade. More often than not, towers before the saddle are passed on the west when possible, while those after it are passed to the east. The final climb to St. John is straightforward class 3, and ends two bumps east of the summit. With a combination of intricate route-finding and tricky climbing, the traverse from Rockchuck to St. John took me over two hours.

In detail… After a false start directly along the ridge, I returned to the summit and descended slightly west, finding a steep scree gully between the ridge and a westward buttress. A short way into this gully, I took an exposed ledge system back to the crest, descended the ridge to an impasse, and did some low 5th class downclimbing on the west side. I eventually reached some angling slabs on the west side which, after a jump, landed me at the base of the previous scree gully. I think following the gully may have been a better route.

I continued on grassy terrain near the ridge, forcing my way past towers with various 4th class climbing on one side or the other. Between gendarmes and steps, the top of the ridge is the most efficient way to go. At one point, I thought I had found a perfect grassy sidewalk around the west side of one gendarme, only to see it disappear into the cliff after a couple hundred yards. (I repeated this mistake later in the traverse.) Later in the season, much of the rest of the ridge is probably easier on its east side, but the east side was still covered in slush. When I bypassed a tower to the east, I tried to walk along the somewhat harder ridge where the snowfield met rock. After the final large tower at the saddle, passed on 3rd class grass and moss to the east, I reached angling benches leading to St. John, and was relieved to find them no more than class 3.

After fish on the summit, I put on bread-bags for what looked like a long snow-slog down to Lake of the Crags, then down Hanging Canyon to Jenny Lake. The chute west of St. John’s summit was an unnerving mixture of slush to steep to glissade, and slabs wet from the melting slush, so it took longer than I had hoped to reach the lake. From there, however, I picked up some ski and boot tracks, then had a wonderful boot-ski down to a few hundred feet above Jenny Lake. I was even rested and impatient enough to jog much of the trail from the lake to the car. 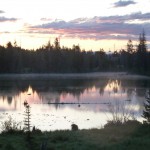 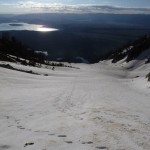 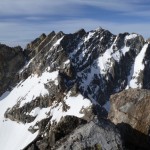 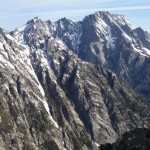 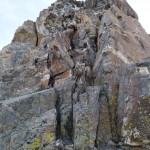 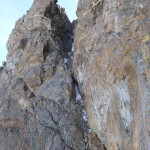 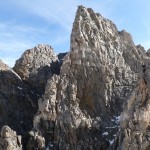 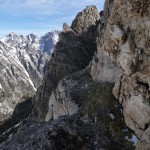 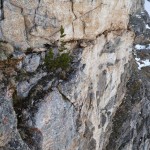 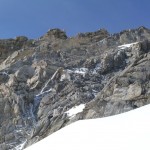 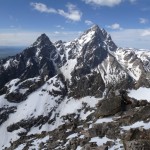 Teewinot and Grand from St. John 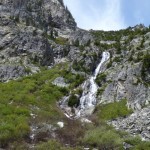 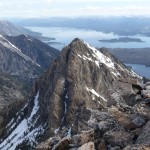