Teewinot’s east face has become a sort of Teton tradition. It’s a short, nontechnical day — class 3-4 when it’s rock, otherwise moderately steep snow — but with about a vertical mile of elevation gain. In 2010, it was a recovery day between Owen and the Grand. Last year and this year, it was a test of the mountains’ conditions and my own fitness at the start of my month in the range. Also, a recent grizzly-mom-and-cubs sighting (of the non-Palin variety) along the Burnt Wagon Gulch trail made getting into Garnet Canyon from the Ranch less than appealing.

More because of the unseasonably warm weather than the chance of afternoon thunderstorms, I got an absurdly early 4:35 AM start. The trail is dry nearly to the halfway point at the Apex, which I reached in 1h15 with only minor postholing near the end. Clouds created some interesting lighting effects in the valley behind, but made the mountain dreary and chilly. However, even at this coldest part of the day, the face was mostly heavy slush, probably from week-old snow soaked by yesterday’s rains. Though I could kick steps in the slush, I put on crampons to make it marginally easier, then started cranking out the second half of the climb.

The face is cut with deep runnels from previous snow sloughing, some cutting through to the rock below. Making my way up and to the right, I crossed several of these before reaching the one leading from the summit. The snow varied from crusty slush, perfect for step-kicking, to slush over a harder crust, good for crampons, to soft wet sludge, good for nothing; I usually managed to find a painless route without too much trouble.

The two places where the main runnel narrows were icy and getting thin, requiring somewhat more care. Above the second, the snow deteriorated to calf-deep sludge, and my already slow progress became even more pathetic. I finally reached the summit in about 3 hours, 1h45 from the Apex. One reason to climb Teewinot is its view of the range’s larger peaks — Moran, Owen, and the Grand — but the summit was at the edge of the clouds, so all I could see was the valley below.

The descent was just a matter of cold hands, with a bit of inward-facing downclimbing in the narrow sections, plunge-steps for much of the rest, and a sweet boot glissade from the Worshiper to the Apex. I found a bit more glissade terrain below the Apex, then rejoined the trail, reaching the car in 1h40 from the summit. Along the way, I was pleased to capture my second picture of a pika in mid-squeak, this time deliberately, by focusing on the critter, then timing the shutter release to his squeaking interval. 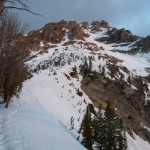 Dawn on the upper face 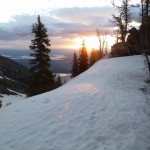 Dawn at the apex 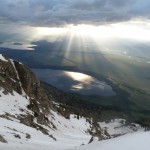 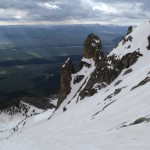 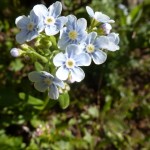 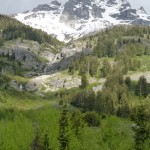 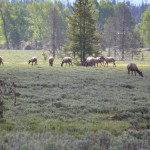 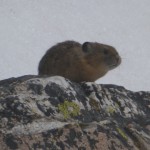 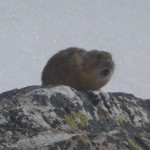