After a long day yesterday, I wanted to try something shorter in the same area. I had admired Powell’s north face from Taylor in October 2010, and figured it would make a good snow climb. Luckily for me, the SummitPost route page describes a shortcut around the dreadful flat switchbacks on the Glacier Gorge trail, which make the approach and return unpleasantly long. Packing crampons and both tools, I made for the climb.

There was a decent boot-pack to Sky Pond, and some old boot and ski tracks heading toward the face. I put on crampons and took up my tools where the snow got steep above the last lake, but it had been warm the night before, and the snow was slushy and soft nearly the whole way up. I should have brought my mountaineering flippers.

I chose what looked like a fairly steep line up the center of the face, and had no trouble kicking steps most of the way up. My chosen exit, a gap between rocks on the ridge that looked cornice-free on one side, proved a bit tricky. The angle was fairly steep, and some of the line consisted of soft snow over rocks. In a few places, I had to dig down to the rock so I could hook a tool. It was actually easiest to top out by going over the edge of the cornice, where the wind-hardened snow gave me decent placements.

Powell’s “north face” is actually a north-facing bowl somewhat west of the summit, so I had a bit of a cold, windy walk to get there. After a break on a narrow, sheltered perch, I made my way around Taylor and past the Andrews Glacier to Otis, then returned to the glacier for my descent. The glacier and the slope from the lake to timberline were delicious boot-skis, but the woods below are still a slush-bog. I lost the trail for awhile, but the bushwhacking was mostly tame, and the trail, which parallels Andrews Creek, is easy to find. 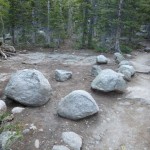 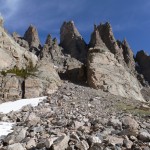 Spires between Powell and Taylor 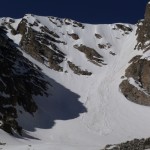 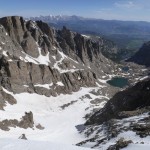 Looking back to Sky Pond 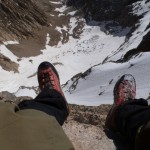 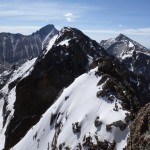 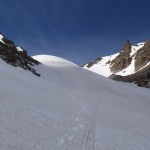 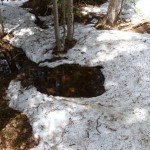