For various reasons, this turned out to be a long day, at just over 12 hours. It also featured a wide variety of terrain, from moderate snow, to exposed rock, to easy alpine ice, to… see below. I think this counts as my first “legit” outing of the season.

Pagoda and Chief’s Head are two peaks at the southern end of Glacier Gorge, one of my favorite areas of RMNP. You can reach the saddle between them via a moderate snow couloir that sometimes turns to alpine ice later in the season. Spearhead, though merely the end of Chief’s Head’s north ridge, is a prominent feature from many angles, and lies right along the approach to the couloir.

I once again got a leisurely 6 AM start, pleased to see that the wind seemed absent. Incredibly, though, it still managed to cause me problems. Near the turnoff to the campsite in Glacier Gorge, I saw that NPS had gone to town with a chainsaw on a mass of windfall:

A few minutes later, I saw the full extent of the problem:

Maybe half a mile of the trail had been completely obliterated, as the woods in the valley had been absolutely massacred by wind. I have never seen this scale of wind devastation before. There was no way around, so I followed the occasional footstep and struggled through as best I could, moving over, under, and along the trees. I finally emerged from the maze near the prominent slab/cascade below Black Lake.

Beyond this point, things were even easier than in summer, with hard snow covering much of the rubble and krummholtz. Below the Spearhead, I met a group of three guys debating whether or not to try climbing it. I was probably less encouraging than I should have been, since as far as I can tell, they turned around without climbing anything.

After passing two frozen tarns, the snow steepened enough for axe and crampons. The couloir was mostly a moderate snow climb, almost too soft in places, but I made sure to go right over a short ice bulge for fun. Snow climbs are a good measure of cardiovascular fitness, and I was sharply reminded me how slow I am now, taking frequent gasp-breaks.

Many of the peaks around Glacier Gorge are steep on the inside, and gentle boulder fields on the outside, so I had assumed that Pagoda would be the same. As I topped out on the couloir, I found that I was seriously mistaken: Pagoda’s northwest and southwest faces are both quite cliff-like. Rather than give up immediately, I decided to at least give it a try.

The left side of the ridge starts off as class 2 near the crest, then bulges outward. I briefly shifted over to the right side, then moved back to the left across a long knife-edge below the first of two towers. From there, I was able to make my way along the left side on a combination of narrow ledges and short face climbs connecting them. Probably none of it was harder than class 4, but being out of practice and wearing mountaineering boots, I was definitely gripped on the face climbing.

I popped up to the crest several times, and after finding some cliffs, eventually found a broad, downward-sloping grass ramp leading east into a sort of bowl on the southwest face. I could have surmounted the cliffs at the base of the bowl via a short ice pitch on the far side, but chose instead to follow some chimneys leading back up the near edge. These mostly went smoothly though there was a bit of desperate climbing with a knee-jam near the top. From there, it was just a matter of gradually-flattening slabs and some boulders to the summit, where I discovered that Pagoda is only easy rubble on the southeast side.

After enjoying the view of Longs and Meeker — you get a good view of both the Keyhole and Loft routes — I took a short summit nap to psych myself up to reverse what I had just climbed. Descending the bowl, I decided I would rather downclimb the ice than the chimney, so I made a descending traverse on snow and ledges, and put on my crampons. Though it was easy (WI2) and short (15′), I was immensely pleased to do something useful with my so-called ice climbing skills. Familiarity made the rest of the ridge was easier, but it was still intense.

Chief’s Head, on the other hand, was just a boulder stroll, though it’s a fair distance along the ridge, and I was feeling slow. Skimming the register, I noticed a familiar name:

Returning to the couloir, I enjoyed a huge slush-glissade, not even bothering with my axe as I rode a snowpile to near the base. Rather than heading for the lake, I contoured around to the back of the Spearhead, which is much smaller and less intimidating than the front. I knew there was a 4th class ramp, and assumed I could figure it out.

After climbing a boulder pile, I followed a series of class 2 grassy ledges southeast of the summit, making my way up and then north. Much to my surprise, things started to turn actually class 4 near the top. 30 feet from the summit, they turned harder still. After exploring a slanting crack and a big mantle off a finger-jam, I decided it was not for me. I retreated a bit, and made my way south to some super-narrow ledges leading to a gap in the ridge. They worked, dumping me on the west face, where an easy boulder scramble led to the summit.

On the way down, I decided to try to follow the “official” route, finding occasional ducks. I eventually made my way well south on the ridge, and crossed over directly onto the grassy ledges. As I had suspected, the route is “Colorado class 4” (i.e. you actually have to use your hands).

Returning to the downed-tree nightmare, I tried staying high to the east, but this was no better than staying near the former trail, and possibly worse. As far as I can tell, there’s no easy way through the area, and trips to Glacier Gorge will be slow for a long time. 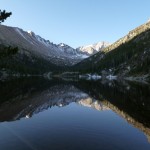 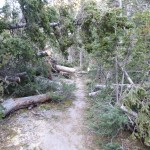 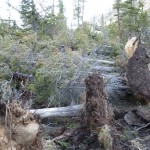 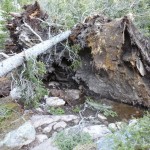 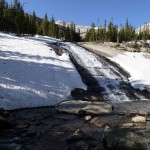 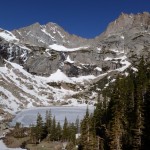 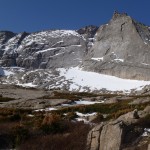 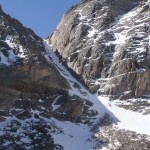 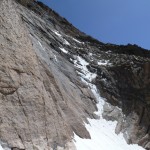 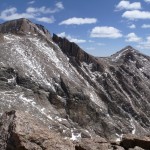 Longs and Meeker from Pagoda 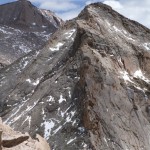 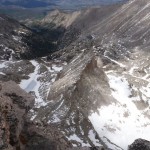 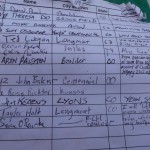 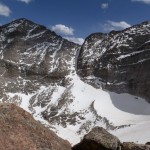 Pagoda and couloir from Spearhead 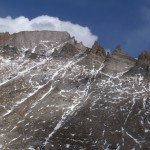 Longs and Keyboard of the Winds