As an almost-14er just northeast of Kit Carson, and a nice-looking peak itself, Adams is worth climbing. While it’s probably best climbed from the west by itself, Sean O’Day gave me the idea to link it up with Horn, Fluted, and Little Horn for a full day. This ended up requiring two very long ridge traverses, made slower by tricky route-finding between Adams and the saddle with Fluted. It was incredibly windy again, and it looks like tomorrow will be more of the same, but no one ever said this was always easy.

I got started at 5:45 from the Horn Creek trailhead, down near the valley around 9,000′, and after a short jog on the Rainbow Trail, headed up Dry Creek to gain some elevation. As I entered the slush zone, I left the trail to hug the north side of the valley, where it had mostly melted. Crossing an open talus slope, I decided it was time to break above treeline and, one arduous scramble later, arrived on Horn’s southeast ridge. Along the way, I passed some surprisingly large pieces of wood well above current treeline.

The ridge was all easy grass, but it also marked the start of the day’s vicious wind. Mostly, it was just annoying, but some gusts forced me to hunker down and stop until they passed. I was mostly fine with that, since yesterday had worn me out a bit. I found a sheltered spot to eat on Horn, then began a long, windy traverse to Fluted’s north ridge. Fluted looks intimidating from the east, with some nice snow lines, but is just grass and rocks in back.

After having a snack perched on the east face, I started to descend the south ridge toward where it splits to Adams and Little Horn. This proved to be the day’s psychological crux. The wind was blasting across the face, my hands were numb, and my blood sugar was probably low. I hunkered in a corner for awhile with all my clothes on (including both pairs of gloves), but after contemplating just tagging Little Horn and calling it a day, I convinced myself to keep going to Adams.

From the saddle to where it turns west, this ridge proved surprisingly interesting and challenging. It was mostly class 2, with short class 3 sequences linking slabs, ridge-running, and grassy ledges that reminded me a bit of Glacier National Park. I ended up using both sides of the ridge and the top, finishing up on the west side. From there, it was somewhat easier to reach the summit. There is apparently a 5th class chimney to surmount the summit knob, but there is also 2nd class grass on the east side: that’s what I did.

After taking awhile to relax and enjoy the view of the Crestones and Kit Carson to the south, I retraced the tricky ridge, then contoured around Horn Creek valley to reach Little Horn’s west ridge. The wind and my fatigue were getting to me at this point, but I eventually made it, finding the only summit register of the day. I ate an apple that I found in my pack (a few weeks old, probably), then dropped quickly down the southwest slope to Horn Creek.

While I saw the actual trail across the valley, it made more sense to avoid the slush by following game trails on the north side. Eventually the deadfall became too annoying, so I crossed the creek and found some sawed-off logs indicating a trail. The trail was in sad shape, with big piles of fallen trees making it hard to follow, but it was better than the forest, and conditions improved as I lost elevation. I had been hiking for awhile, not in any real hurry, but the trail-tedium finally drove me to a jog for the last couple of miles. I guess I’m glad I did the others, but Adams was the only real highlight of the day. 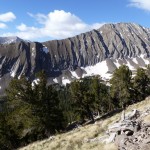 Little Horn from the north 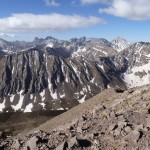 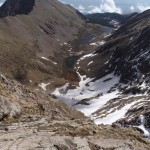 Horn and Dry Creek from Fluted 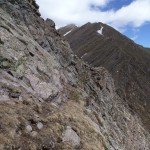 Grassy ledges on the way to Adams 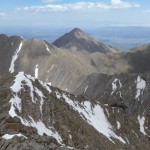 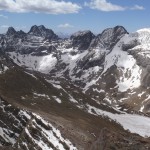 Crestones and Kit Carson from Adams 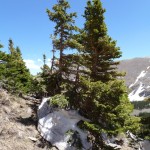 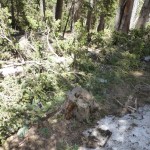