Note that this post may suck, because it’s mostly written on one of the Library computers in Westcliffe, with a 30 minute time limit and an egg timer (really) reminding me of said limit. After 3 years of abuse, my trusty MacBook’s keyboard only partly works. While I can get around the problem, it’s hard to type using “[” as your space bar.

Today is the start of the 2012 dirtbag season. After some time in Colorado, I will once again spend June in the (much drier, this year) Tetons and August in the Sierra. Between, I plan to sample the Winds and probably North Cascades. Come along for the ride!

I didn’t know much about this first route, but the pleasant Music Pass trailhead was a reasonable evening drive from my winter home, even with the final late-night flailing on dirt roads. It was claimed to be 5th class in places, and to be a long day. Neither is true. It’s 4th class at most, and a perfectly reasonable day with wonderful views.

After arriving at night in light rain, I finally saw what I faced as I started at 6, and was not entirely pleased. “Slush season” can make Colorado forests almost impassable, and there were several drifts of slush around the parking lot and along the start of the trail. With such a high trailhead, Music Pass itself is only 1.5 miles away, despite being at around 11,500 feet. The valley to the east was filled with morning fog, and the sky was partly overcast, as it would remain for the rest of the day. While I know that such clouds usually don’t mean anything, they still made the start of the day cold and grim.

At the pass, you enter Great Sand Dunes National Park, but continue on a well-maintained alpine trail into a high valley containing Lower and Upper Sand Lakes. Thanking whoever actually placed signs at the junctions, I made my way toward Upper Sand Lake, through deeper and more frequent slush. Fortunately someone had postholed a path before me, so I was able to stay more-or-less dry by stepping in his footsteps.

Soon after passing a tent (the only human sign of the day), I made a break for timberline, tromping through bogs, slush, and brush to reach the snow-free tundra. Finally out of the trees, I was able to orient myself and figure out which peak was Tijeras, based on the locations of the lakes and my photo of the map on the sign at the pass. Yes, I like to be prepared.

While Tijeras has a broad, gentle northeast slope, it is guarded from below by a line of cliffs and steep slabs. I dropped into the valley to its east, losing hard-won elevation, and more or less at random decided to start by checking out an apparent break on the north side. I was surprised and pleased to find a cairn, and more so to find that the snow-ramp leading through the cliff band was soft enough to kick steps with running shoes (too soft, in fact — I postholed about half the time).

Above the cliff band, the wind picked up and I put on every piece of clothing I had brought. These conditions would persist for the rest of the day; even when it warmed up in the early afternoon, the wind remained vicious. The route to the north ridge and summit was no harder than class 2. After eating a sandwhich in a sheltered spot while checking out Music from this intimidating angle, I made a beeline to the base of Music’s south ridge.

While this ridge looks intimidating, it is really just 2nd and easy 3rd class to the summit, where I found a broken analog watch in a plastic bag. Music’s north ridge is much more difficult, with a couple of 4th class downclimbs to the west to avoid difficulties on the ridge crest. Maybe it is low 5th if you stay exactly on the crest, but this can be avoided without dropping more than 30-40 feet. I found my first register on Milwaukee, signed in, and had half a sandwich. Having only packed 4, I had to start conserving resources.

Aislado looks impregnable from Milwaukee, but the southeast face is not as steep as it looks. Though the route-finding is complex, a system of grassy ledges and hold-rich slabs keeps it class 3. It was probably my favorite of the 5 peaks. After another half-sandwich and a bit of relaxation, I made my way back over Milwaukee to a trail I had seen earlier to the northeast. The 200 yards between Milwaukee and the trail were surprisingly difficult, with gullies and gendarmes blocking the way. The normal ledge bypass (based on cairns and boot wear) was blocked by snow in places, so I had to improvise a bit.

Though the trail started off pleasant, it soon turned onto a northwest slope and into a snowfield. I stitched together grass and rocks where I could, regaining the trail at the north end of the Sandy Lakes valley. From here one could drop down to the Upper Sandy Lake Trail and return over Music Pass, but I chose to tag Marble, then continue south along the ridge to the pass.
While getting to Marble was easy — just some grassy side-hilling — the ridge beyond was interminable, the wind stronger. Worse, I chose to bypass the nameless 12,000′ point on the south end to its west, where there was more wind, several intervening ridges, and a dense forest on loose ground leading to the pass.

Still, I had enough energy to jog back down to the car in 8h20. This is a moderate loop, both distance- and difficulty-wise, and the scenery is hard to beat, with the Crestones to the north and the Blanca group to the south. If you find yourself in the Sangres and have already done the 14ers, it’s worth your time. 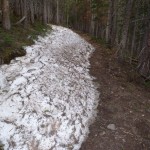 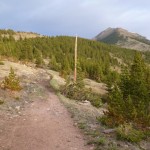 Trail to Music Pass, with return route at right 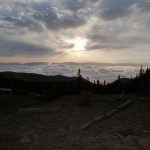 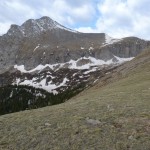 Tijeras from the east 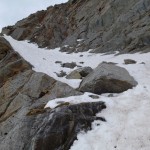 Snow-ramp through the cliff band 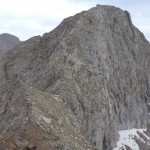 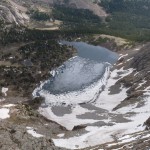 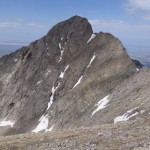 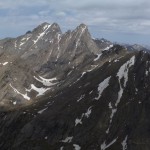 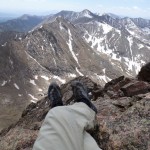 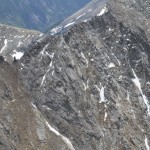 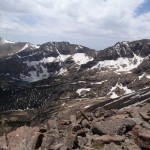