After a cold night near Silverton, I knocked out the peaks on the ridge west of Molas Pass, starting from Little Molas Lake. Snowmobiles are unfortunately allowed in this area, and their tracks are everywhere. However, with an early start, I only saw them from a distance; in fact, despite near-perfect weather and snow, I met not another soul more than a few hundred yards from the trailhead.

The route is completely obvious: aim for the low-point in the cliffy horseshoe north of the Little Molas Lake trailhead, then follow the ridge north, ticking off high points. The snow was well-consolidated, and mostly good snowshoeing, so I made about the best time my current slow self could climbing to the saddle. Near the ridge, I was surprised to run into two ptarmigans in full winter plumage. As is their wont, they milled around at a safe distance, allowing me to take plenty of pictures.

The recently-named (2008) Spencer is right along the way to Sultan; it had a nice PVC register tube, but no register. A direct line from Spencer to Sultan skirts Grand Turk to the west, but it’s only a minor detour to tag the peak. The western summit is the highest (or at least it has the cairn and register). I tagged it, then returned to the main ridge to Sultan, admiring a large, shallow avalanche on the east slope, apparently started by a collapsing cornice.

From Sultan’s summit, you have a clear view down to Silverton, across to Red Mountain Pass, and back over Grand Turk to the “real” San Juans: the Grenadier and Needle ranges on the other side of the Animas River. With their long approaches, any trip to the real-peaks is a multi-day ordeal this time of year, so I’m content to admire them from a distance.

It was still early, so I looked around for other objectives, and eventually decided just to tag all the lesser bumps I had skipped on the way out. The one southwest of the first saddle had an official-looking register for unofficially-named “West Turk’s Head.” Looking east, I saw an interesting little bump on a long, cliffy ridge, and thought that might be “East Turk’s Head.” As it turns out, it is just another unnamed peak with a register, but it proved the most difficult and interesting peak of the day.

I tried coming at it directly along the ridge from the saddle, only to be stymied by a vertical notch no more than 100 yards from the summit. It might have gone as class 4 or low class 5, but the whole ridge was made of terribly friable conglomerate rock. Instead, I retraced my steps and contoured along the south side of the ridge, then climbed the couloir to the notch. From there, it was loose class 2 followed by 10 feet of exposed, rotten class 3 to the top of the knob. Having exhausted my peak options, I returned to the car for a somewhat short day. 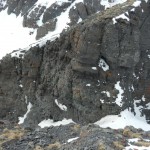 Looking back at notch. 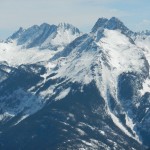 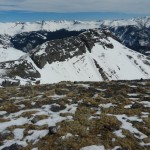 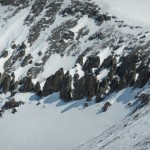 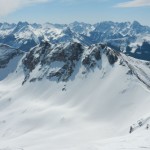 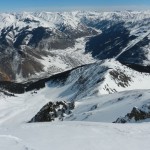 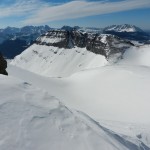 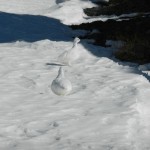 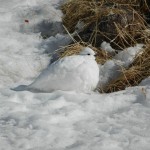 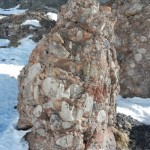 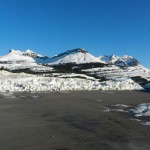