While it doesn’t have any particularly high or spectacular peaks, Chimney Peak Wilderness, at the very southern end of the Sierra, is still worth at least knowing about. It contains a scenic shortcut from 395 to Lake Isabella, up Kennedy Meadows Road and down Canebrake/Chimney Peak Road (graded dirt, with a nice little campground along the way). There are a few SPS peaks in the area — Sawtooth, Lamont, and Spanish Needle — plus Owens and another Pilot Knob nearby.

Finally, it’s BLM land, the closest thing to anarchy this side of Somalia! You can shoot a man while driving an ATV blind-drunk on moonshine, then roast quail and marshmallows over the body, as long as you remember to build a fire ring, smother the ashes afterward, and pack out your trash. Well, not really — it’s still more-or-less part of the United States, and there are some nice BLM tracts out there which I would like to see stay that way — but at least everything is free.

This a super-easy bushwhack either from the southwest, from the PCT, or the northeast, from a road that apparently used to be part of a scenic jeep loop (Chimney Basin Road on some maps), but is now blocked by a “POSTED No Trespassing” compound (apparently of the scary, off-the-grid, we-shoot-first kind). Still, it’s a short climb from the gate, and you can pick up an old road that takes you partway up. There’s even a picnic table along the road, suggesting that it was graded by BLM many years ago.

Chimney sees few summits, and for several years was climbed only once annually by the Chimney Peak BLM superintendent and his dog. From an old film canister in a bush next to the main register, I learned that once again Smatko had been there first.

This is a moderate bushwhack from the PCT if done right. Perhaps two miles in, the trail crosses a ravine at the point where it flows over a large, flat rock; there may be a cairn left of the trail just after the ravine, near a game/use trail. This ravine is near the apex of a large bowl north of the trail. Follow the ravine up the valley and through a cliff band, finding occasional ducks, then make your way to the northeast however is easiest; the peak is the eastern highpoint of the ridge.

If you get off-route, you can look forward to lots of oakbrush, and maybe even small cliffs of rounded, rotten granite. So don’t do that.

There is a nice view of Owens Peak to the south, and Olancha and the high Sierra to the north and northeast, including Langley, Whitney, and possibly the Kaweahs and the Mineral King peaks.

Unlike Chimney and Sawtooth, bushwhacks up unremarkable blobs, Lamont has both a trail to near the top, and a distinctive shape. The trail climbs from a saddle along the road (5400′) to the summit with no nonsense switchbacks and little elevation loss. The rocky summit looks out on a line of steep granite pillars leading north, a distinctive feature visible from much of the area. At least, the “Lamont” I climbed has these things. Though it had SPS register books and many of the regulars had signed them, a forested point somewhere west on the ridge may be higher, and may be the official Lamont. This one was much nicer, though.

Staying north of the ridge (south lies only oakbrush and misery), one soon picks up an abandoned but still useful spur of the PCT, convenient in linking Lamont with Spanish Needle and possibly Sawtooth.

My road atlas — the only map I have for this area — does not include Spanish Needle. However, from knowing its elevation and seeing register entries on Lamont and Sawtooth saying that it was possible to link it with either peak, I suspected it was one of three relatively sharp peaks to the east, on the ridge north of Owen. As it turns out, the south peak is “Polly’s Needle,” the middle Spanish Needle, and the north apparently unnamed, though it had an old-looking, totally blank BLM register.

I climbed the unnamed one first, then eyed the traverse. It looked too tough, but I checked it out anyways. It quickly turned 5th class, so I retreated, downclimbed, and found some ducks. The proper route for Spanish Needle does a bunch of annoying side-hilling to reach a saddle, then some contorted 3rd class to reach the summit. The crux for many people is apparently crossing a large, angled slab on the northeast side, reached by a series of flakes and a cut or dynamited step (!). One normally approaches from the PCT north of the peak, where it touches the ridge. I returned to this saddle, jogged to the Lamont cutoff, and made it back to the car much more quickly than on the way out. 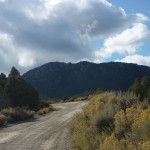 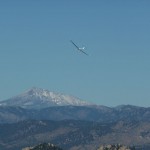 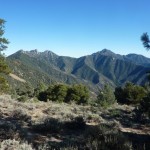 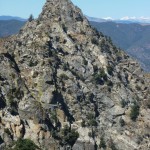 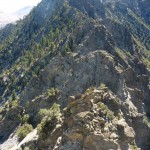 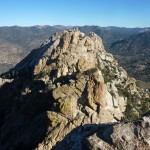 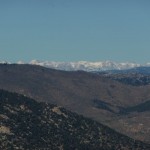 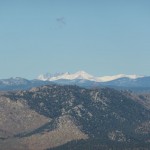 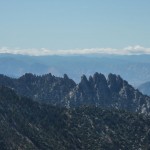 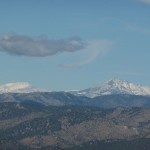 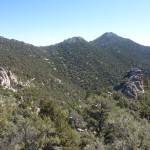 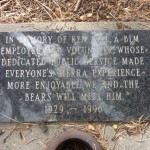 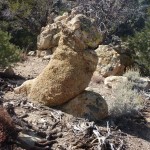