Jordan and Genevra are two peaks on the western end of the Kings-Kern divide, near its intersection with the Great Western Divide. Being near the GWD, they’re close to the center of the range. Bob had done them out of Road’s End, and I figured I might as well while I was over here. Other ways to get at them include coming over Shepherd Pass to near Lake South America, and coming over Kearsarge Pass and down to Junction Meadow, but this way seemed least painful. Still, it’s a 15-mile trail grind from Road’s End (5100′) to Reflection Lake (10,000′), and another 3300′ of class 1-3 from there to Jordan. Having done it, I am glad I will never have to repeat the approach, which gains its first 3000′ over 10 lackadaisical miles.

Due in part to a miscalculation on my part, I got a shamefully late 4:50 AM start, which still incurred nearly 1h30 of morning headlamp time so late in the season and so far west in the time zone. This allowed me to grind out the sand and switchbacks to the Avalanche Pass turnoff in the dark, listening to “This American Life” rather than counting the miles.

From this fork, the trail follows Bubbs “Creek” (a river even now), slowly gaining elevation until it reaches Junction Meadow around 8000′. At Junction Meadow, I turned off to head for Lake Reflection, meeting two campers starting their day. I saw the ford, looked for a dry crossing downstream, and met the two campers again as I realized the big log I saw only went partway across. The creek splits above the ford, and I was able to get across dry with five or so easy to moderately difficult crossings and some bushwhacking.

The trail above the ford is well-maintained and -used, and I had no trouble following it as it switchbacked up one side of the creek, crossed on a well-built bridge (horses can’t ford steeper streams, I guess), and continued up the other to East Lake. Though there were recent tracks and horse dung, I didn’t see any campers.

Above the lake, the trail mostly disappears, but I managed to stay on track with a simple game of “follow the manure.” There were piles of it everywhere leading half-way up to Reflection Lake. It’s outrageous that packers and mule-tourists are still allowed to pollute so much of the Sierra this way. I accept that “tradition” should allow mules in some parts of some parks, like the Grand Canyon, but the damage caused by pack animals should be limited to as few places as possible, and should never go beyond well-maintained trails. As far as I can tell, you can use your mules to trash almost any part of the Sierra you like (except the Whitney Zone, of course, since forcing people but not mules to carry wag bags would be a bit too obviously hypocritical).

Lake Reflection, apparently above the manure line, would be a great place to camp. At only 10,000 feet, there are plenty of trees both around and above it. There also enough avalanches to send some of those trees into the lake, creating an impressive (though not Snowmass-scale) logjam and plenty of submerged logs. I followed a fairly well-defined trail around the south side, then took off sluggishly uphill to the southeast, following occasional ducks toward Milly’s Foot Pass. Stopping at a large tarn for water, I took out my map to orient myself. While Genevra towers above the head of the valley, Jordan is hidden by Genevra’s west ridge and its own subpeaks. I was able to pick out Jordan’s north face, though, and it didn’t look particularly 3rd class.

Still, I headed up into a bowl to the southwest, then gained Jordan’s north ridge, a more apt description of the route. Most of the ridge is class 2, and although shaded by the peak, did not hold any snow from the early-season storms. The ridge eventually merges into the face, where patches of snow started to appear and the climbing became class 3. Though it was near noon, the sun was too low to shine on the face, and cold hands added to fatigue made the climb less than joyous. As I neared the top of the seemingly-interminable face, route-finding became more important. Near the top, I found two seemingly 4th-class parallel cracks that proved harder than I expected.

I unhappily retraced my steps, only to find that rounding the corner to the east brought both sun and easy climbing to the ridge. Better still, the Booty Gods showered their bounty upon me, in the form of a nearly brand-new ice axe, just my size and better than the one I have. It seemed to have been there through at least one storm, and possibly over the winter, making it fair game. Rounding a few towers to the left, I soon reached Jordan’s summit block, a massive piece of granite perhaps 20 feet high.

Secor calls it 4th class via either a step-across or a crack. I didn’t see the crack, but the step-across was obvious. It has good holds on the lower block, with smaller nubs on the higher. However, it is narrow enough that you can plant your foot on the summit before committing to the move, and not really exposed — a fall would be painful rather than fatal. Reversing the move is a bit more dynamic, but you can just dive for the big holds on the lower block.

From the summit, the Great Western Divide and Kaweahs were clearly visible to the southwest; I contemplated the strangeness of looking west at peaks I had recently reached from the east side. Ericsson and its crags looked interesting, though they require a long grind up Shepherd Pass, and I have already climbed most of the surrounding peaks. Whitney’s north face was still holding quite a bit of snow, so it will probably be somewhere between annoying and dangerous until next summer.

While one could return down Jordan’s north face, it is probably both faster and easier to descend Milly’s Foot Pass via Genevra, which is kind of in the way. Taking a loose chute down Jordan, I stayed relatively high, scrambling and swimming my way to Genevra in just under an hour. Being both easier and closer to well-used trails than Jordan, it seems to see quite a bit of traffic, especially from people on trail crews.

Milly’s Foot Pass, the low point of the ridge east of Genevra, is supposedly 3rd class, and it certainly was the way I did it, with plenty of loose junk on top to make me think. I was looking forward to adding it to my list of “cross-country passes more difficult than Hands-and-Knees” when, looking back, I saw a hidden cleft with an easy dirt chute to the ridge. D’oh!

Finally picking up the trail again at Reflection Lake, I settled in to grind out the 15.5 miles back to Road’s End. The couple I saw in the morning near Bubbs Creek was still there, and asked where I was camped. As if…

I jogged some of the easier trail sections to cut down on headlamp time, but didn’t really push it. Heading up in the morning, I had laughed at what I thought was the most useless note imaginable:

After all, animals do tend to move, especially after you annoy them by almost stepping on them. Imagine my surprise when I came around a corner to see this lying across the path:

Being fond of snakes, my first thought was “careful, don’t step on it.” Then I got a closer look at its tail, and my second though was “oh shit, rattlesnake!” But true to its nature, the snake just didn’t want to be pestered, and slithered out of my way without even bothering to shake its rattles, moving slowly in the cool evening. 20 yards down the trail, I found the note and added my own addendum.

As punishment for my late start, I suffered 1h20 of evening headlamp time, reaching the car at 8:20, and drove out of the park to find a place to sleep undisturbed.

I was hoping to get in one more big and one smaller Sierra outing, but Jordan and Genevra gave new life to a stomach bug I thought I had overcome before, and the weather turned bad before I fully recovered. Blech.

Reading Bob’s trip report, I realized that for some reason he went up Milly’s Foot Pass, over both peaks, and dropped down the west side of Jordan before circling back around to Lake Reflection. I’m not sure why he did it that way, but my way seems considerably faster, both because it’s shorter, and because the Jordan-Genevra traverse is probably less painful in my direction.

Finally, there’s wireless at Cedar Grove, though it was too unreliable to be useful to me. 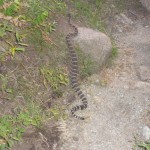 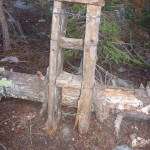 Ladder near an established camp 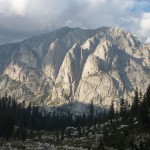 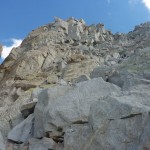 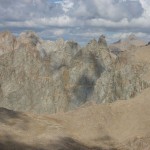 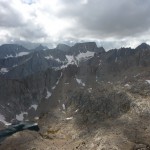 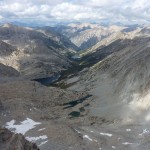 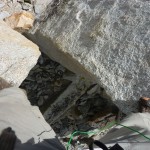 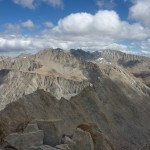 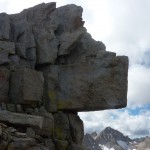 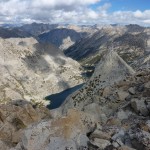 Back toward East Lake 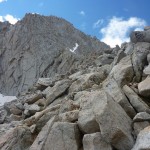 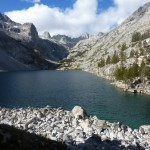 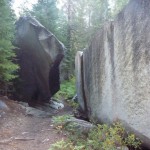 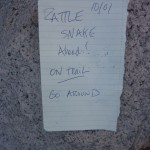 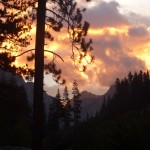