Mount Goddard is another “deep” Sierra peak, not easily reached from any trailhead. I approached over Haeckel Col out of Lake Sabrina, and returned over Wallace Col after traversing Huxley, Warlow, and Fiske. The latter were trickier than expected, making this a 15h15 day; Goddard alone would have taken around 12 hours. I lucked out on the weather: there were serious thunderstorms to the north, and lesser storms to the west and south, but I managed to find a mostly-sunny patch.

Expecting a long day, I got a proper early start just before 4 AM. The moon is perfect now, staying bright and well above the horizon until the sun takes over. After an eternity on the trail through Sabrina Basin, I easily found the cross-country start of Haeckel Col by moonlight. The sun rose on Haeckel as I reached the startlingly blue and clear lake I remembered from the year before, 2h40 into the day. After refilling my water, I continued past lake 12,345′ — already slushing over for the season — and reached the col just over 3 hours from the trailhead.

Some of the rocks were frosty on the col’s shady west side, but not enough to be a problem. Navigating down the slabs would have been tricky in the dark, but I had little trouble finding a class 2-3 line traversing right and down to the lake. Gradually losing elevation on slabs and grass, I hiked and jogged my way down to Evolution Basin, then up the other side to reach the JMT in 4h30.

Having traversed southwest across the basin, I was only on the trail for perhaps half a mile before leaving it where it crosses the outlet of Wanda Lake. I crossed the gentle saddle over to Davis Lakes, admiring the south face of Mount McGee. What looked like punishing talus in the basin was actually stable and interspersed with grass. The Starr route on Goddard was obvious, following a ridge leading south to a point on Goddard’s east ridge. How to get onto the ridge was less obvious, and I chose some slick 3rd class rock on the east side of the ridge; the north and west sides of the ridge turned out to be class 2 at the base.

The route started out as solid rock on the spine of the ridge, then turned to looser talus as it contoured up and left to the crest of the Goddard Divide. A large cairn marked the spot for the descent. From here to the summit was a slog along frustratingly loose talus; an entry in the summit register aptly described Goddard as “a gigantic pile of shit with a spectacular view.” To the northwest were Davis Lakes and McGee; northwest, the Evolution ridge; west, the Goddard Divide and Palisades; southeast, Scylla, Charybdis, and Black Giant; south, a basin with numerous ice-choked lakes.

Having reached the summit in 6h20, I would be back to the car in under 12 hours if I returned directly. Since I felt energetic and the weather held, I looked around for something else to climb. Solomons, at the other end of the Divide, was one option, but it looked like a long slog across loose talus. Huxley, Warlow, and Fiske seemed more appealing: they were right along the way back to Sabrina, and were the only three peaks in the Evolution Traverse that I had not yet climbed. I had photographed the relevant page of Secor, and he described many class 2-3 routes on the peaks. While he did not mention the traverse itself, I guessed that it would be similar; at least, I would have plenty of escape options if the weather turned.

I made as if returning to Haeckel Col, but turned off a bit farther south, contoured around an unnamed lake, and headed for the left-hand chute on Huxley’s west face. This was mildly annoying class 2, nowhere near as loose as Goddard, with a short class 3 headwall to the ridge, and easy scrambling to the summit. I signed in just after 1:00 — 9h out — in an island of sunny sky amidst gathering storms, then began the traverse.

This being part of the Evolution Traverse, one of the classic Sierra traverses, I should have guessed that it would not be a simple class 2-3 cruise. Indeed, the ridge crest itself consisted of huge blocks and flakes, while the sides varied between loose and impassable. Keeping things class 3-4 required careful route-finding, and my progress was painfully slow. I had to force it in a couple of places, making hand-jam descents and desperately toe-pointing reaches, but I eventually reached the Huxley-Warlow saddle, where the difficulties suddenly ended. I was definitely feeling my hours on the trail on the way up Warlow, but reached the summit about an hour from Huxley.

The difficulty abruptly increased as I crossed Warlow’s strikingly red east summit on the way to Fiske, and I had to retrace my steps in a few places. I might have enjoyed the challenging scramble in other circumstances, but I had been moving for 10 hours, storms were building to the north and west, and I was getting impatient.

The ridge once again became class 2 boulders at the saddle, and I slowly, painfully made my way up to Fiske, listening to the occasional thunder from the storm to the north. This section of the ridge also took about an hour. The traverse to Fiske’s east summit looked easy, but I couldn’t see the ridge between there and the Wallace-Clyde Spires ridge. As it turns out, the class 3-4 trickiness resumes, with much treacherous loose rock. Staying near the ridge crest seemed to work best, with occasional forays onto the south side. The north side, still covered in fresh snow, was not a pleasant option.

Finally reaching the last notch before the ridge junction, I opted to side-hill across some hellish sand and scree in a direct line to Wallace Col. This sucked, but it probably saved time over climbing to the peak at the junction and descending along the ridge. Wallace Col is a pile of loose sand and rock on both sides, fun to descend, but miserable to cross in either direction. Fortunately, I was coming from the ridge, so I only had to travel the fun way.

Remembering that Echo Lake is cliffy, I traversed high on a talus bench to its northwest, picking up some nicer, grassy slopes that led me down to the valley north of Echo Lake, where I picked up a faint use trail headed north to Hungry Packer Lake. This trail feeds into the convergent mass of trails from various lakes back to the Sabrina trailhead. I probably should have jogged this part, but was tired enough that walking (with many shortcuts) felt fast enough. In any case, I made it to the trailhead with no evening headlamp time, 15h15 from the start. 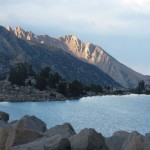 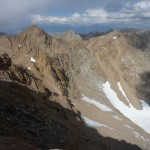 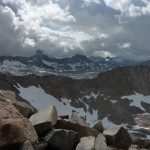 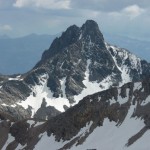 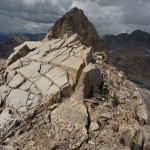 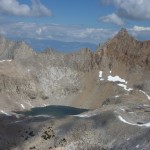 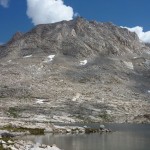 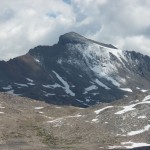 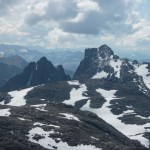 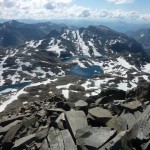 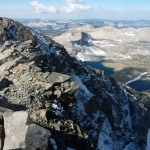 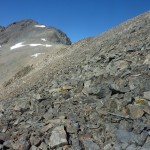 Goddard from top of ridge 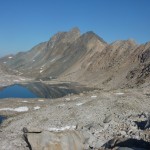 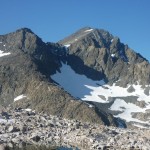 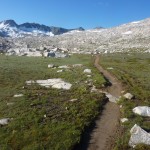 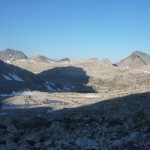 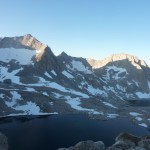 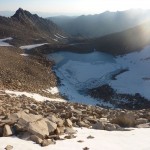 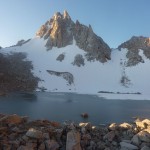 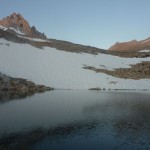