I had looked across at this couloir the previous day from “Treasure Peak,” and watched two climbers apparently turned back by the 5th class headwall. It piqued my interest enough to hit the trail at 5 AM, despite rain the night before, warm temperatures, and a partly overcast sky.

Having descended the approach the previous day, I was able to negotiate the first off-trail sections by headlamp, remembering roughly how to proceed through the trackless talus. Dawn revealed a few patches of blue sky, but mostly clouds. This wasn’t encouraging, but it did make for nice pictures.

I put on crampons when I reached the snow, but they were hardly necessary. It had apparently rained the day before, then snowed overnight, so the top layer of old snow was somewhat slushy, covered by less than an inch of graupel and powder. Many suncups and an ice lake later, I reached the base of the couloir, took out my tools, and put on another pair of gloves.

The fresh powder had collected in the suncups, while still covering most of the old snow’s surface, and I found myself stabbing a mixture of powder, névé, and slush. The couloir steepens near the top, and I found myself taking actual swings rather than simply stabbing the snow in front of me. The upper fringe of the snowfield was actual ice, and some of the upper couloir might be ice after the next freeze, but it was still possible to avoid significant ice climbing. Finding a stance to change gear on the rocks took a bit of work — there aren’t any obvious, fat ledges.

The “5.4” exit pitch looked more like 4th class to me, but a fresh dusting of snow and some old ice patches spiced it up considerably. Though I put away my tools rather than trying my hand at dry-tooling, I kept my crampons on up to the summit plateau. I started to the right, where the previous day’s tracks ended, soon heading back left with a large, unnerving step around a bulge. Moving on, I avoided more difficulties via a crawl-through to the left, returning once again to the main gully. From there, more delicate maneuvering, “crampon-jamming,” and stemming got me up in a line mostly on the right side.

Finally reaching the summit plateau, I put away my crampons, then followed a line of pointless cairns to the summit, destroying some as I went. While I had hoped to get above the clouds, the summit was still completely covered, with minimal visibility. My original plan had been to continue on to Dade, either by dropping south (or southwest?) to Gabbot Pass, or by taking the ridge directly. However, not being able to examine either route, I chose to return via the standard route. I glanced through the register — which I almost didn’t find under the snow — and saw no entry from yesterday, so apparently the party I saw had unfortunately given up.

Even in the clouds, the standard route was easy to find from Secor’s description, and I quickly made my way back to the boot-pack near the couloir’s base. I do not recommend climbing the standard route! If you must, do it alone and very early in the day. The section from the ridge to the snow is a bowling alley filled with loose sand and rocks, and it is nearly impossible for someone descending to avoid knocking down a steady stream of various-sized projectiles.

The snow was soft enough that I could (barely) plunge- or kick-step the rest of the way to the lakes. Looking back, I saw Abbot’s summit emerge from the clouds, only to be almost immediately re-enveloped. I had a pleasant, quick, mule-train-free hike back, reaching the car just as the clouds began spitting rain. 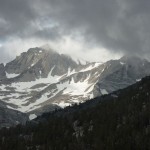 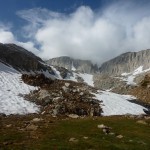 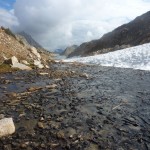 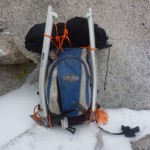 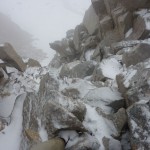 Crux rock from above 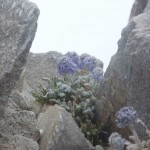 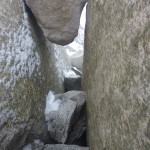 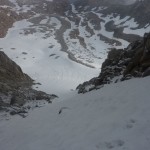 Down from the top 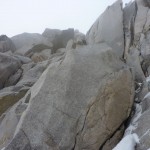 Rock crux from top of snow 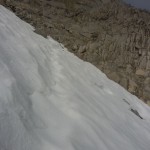 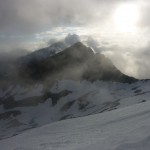 “Treasure” with Morgan behind 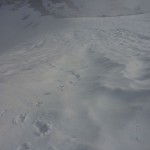 Track to base of couloir 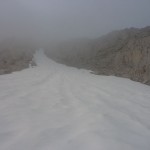 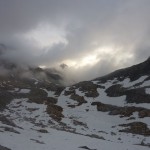 Back toward Mount Starr