For the second part of my moderate couloir tour, I crossed the Tioga Pass road to climb the Dana Couloir on Mount Dana. With clear skies, the temperatures were a bit cooler than on North, so I was cautiously optimistic about the snow conditions. The Tioga Lake trailhead was amazingly crowded, but most people seemed to be heading for rock routes like the Third Pillar. This was hardly surprising: the couloir isn’t water ice now, so Real Men won’t touch it.

The climbers have beaten a nice trail along Glacier Creek — too nice, in fact, since it drew me up onto the plateau east of Dana. Some side-hilling brought me back to the valley, with two lakes and an interminable terminal moraine. The second lake was a deep, attractive blue, which was unfortunately difficult to capture with a camera.

I found the snow runout below the glacier pleasantly hard, and put on crampons for the day’s main attraction. To spice things up a bit, I headed over to some exposed glacial ice for a bit of legitimate, though low-angle, ice climbing. Above that, the snow was fairly hard, and there were even some veins of ice for variety. The climbing was much better than on North, but still a bit soft. From where the couloir tops out, the summit is a long-ish scree slog away.

I had originally planned to continue on to Mount Gibbs — another summit to collect in my half-assed attempt at completing the SPS list — but it looked far away and not too much fun. Instead, I took the tourist trail back to Tioga Pass, then walked the road to my car, shaking my head at the long line of cars waiting to get into the park. 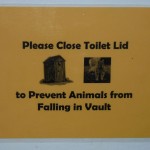 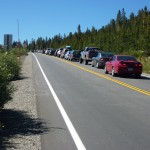 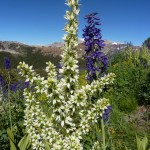 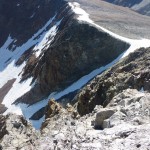 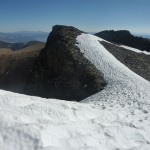 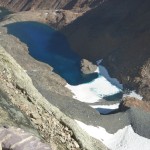 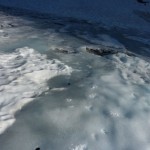 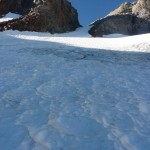 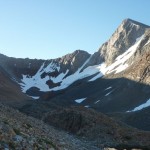