Mount Giraud, on the south side of Dusy Basin, was the site of the Sierra Challenge’s only serious injury some years ago, so it has a bit of a bad reputation. However, it is supposedly a fun class 4 scramble and a moderately long day, so it sounded like a good outing from South Lake. It is also an interesting-looking peak, with distinctive smooth ramps sloping up and left on its north face.

I felt dead and slow for some reason, so I got a late start and wasn’t loving life as I made my way up Bishop Pass. Making my way down the other side, I heard a helicopter, and stopped to watch as it swept the southwest face of Thunderbolt for awhile before apparently giving up and heading home. I heard it again several times throughout the day, so apparently there was a serious search-and-rescue going on Wednesday. I hope whoever it was survived.

To get to Giraud, you drop all the way to the bottom of Dusy Basin, to where the Bishop Pass trail turns west and descends into Leconte Canyon, then leave the trail and continue south, regaining the lost elevation. As everywhere in Dusy Basin, the cross-country travel is a pleasure, being mostly easy slabs and grass. I topped out on a ridge overlooking a sea of talus between myself and Giraud. The northeast ridge looked most accessible on the far left end, so I contoured around the talus, noticing occasional cairns.

I reached the ridge east of one small and one large bump; the first was easily bypassed with a bit of a slab traverse, while the second required some tricky climbing down and around the left side. From there, I detoured left again, found annoyingly brushy class 3, and decided to stay closer to the ridge. This provided some enjoyable knife-edge traversing, but also some difficulties. At one point, I reached a flat rock balanced on the ridge that was too high to mantle up from below, but was an easy hop down from above. Getting around the one-way rock required a big detour down the south face again.

I was apparently the only person to have visited Giraud this year. I was amused to see an earlier register entry along the following lines: “Up the west ridge, headed down the east. Nope, heading back down the west.” I still felt wooden, so after eating, I napped for an hour before making my way back down.

Rather than re-crossing the two bumps, I exited the ridge at a dirt gully next to a slab that I had noted on the way up. It started easy, but turned class 4 near the bottom, where the snow was a bit too steep for running shoes. Worse, my body chose this moment to request, politely but firmly, that I “punch a grub.” I was very much not in grub-punching terrain, however, and had to mightily refuse. A bit of step-kicking with two stone tools eventually got me to lower-angle snow, then the moraine and relief.

While I was dreading the climb back up across Dusy, I actually enjoyed myself, plugging away up the moderate incline while enjoying my music and an impressive view of the Palisades. The familiar, dusty slog down Bishop Pass got a bit old, as I was not feeling lively enough to run it, but the old trail I found last time cut off quite a bit. I even saw an old man using “my” shortcut, though he might have just been looking for a place to pee, as he refused to acknowledge my presence. 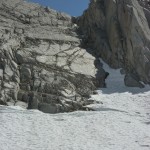 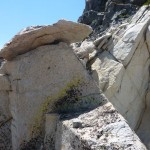 One-way rock from below 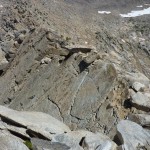 One-way rock from above 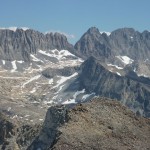 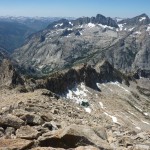 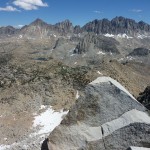 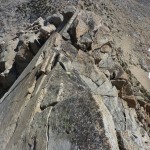 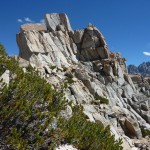 Second, tricky tower from above 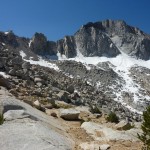