Crystal Crag is a little fin above Lake Mary, near Mammoth Lakes, named for a vein of quartz crystals near the top of its north end. With a short approach and a variety of routes ranging from 3rd class to 5.8, it is a popular half-day climb. I chose a 5.6 variation that climbs the north arete, passing through the crystal band.

Secor’s description of where to start is not too helpful — there are several dihedral/crack combinations near the north end — but I found a pair of roped climbers who thought they were starting up the 5.6 variation. I waited for the follower to get most of the way up, then caught them at the first belay. The first pitch starts out with a short, wide chimney, then moves onto the face with plenty of positive holds. I thought it felt easier than 5.6.

I left the roped pair at their belay and, after checking out a higher ramp, climbed the ramp directly from the belay, then made my way left over some steps to near the arete. Moving onto the arete felt like the crux, but there are many possible routes, and I may not have chosen the easiest or “right” one. I was close enough to reach the crystal pitch, though, which was short, but as cool-looking as promised. I stopped to take a few pictures of the huge quartz blocks, but it was hard to get a good shot in the shade.

From the top of the crystals, a long, exposed 4th class traverse led to the summit. I had my burrito and sat around a bit, but eventually gave up waiting for the roped climbers to top out on the other side of the ridge. Either they had route-finding problems, or they were incredibly slow.

Since it was a short climb, I decided to take the long way home, descending the class 3 south ridge, then wading through volcanic hell-sand to the Mammoth Crest. From there, I picked up the crest trail, which joined the Crystal Lakes trail and took me back to the trailhead almost too soon. 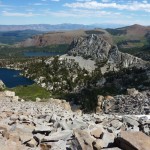 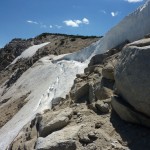 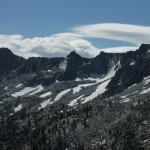 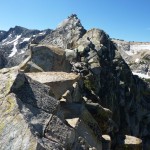 Summit from above crystal pitch 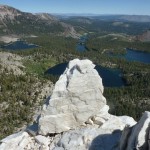 Looking out over quartz 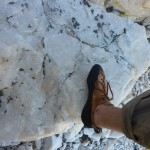 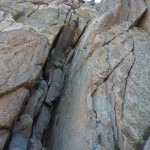 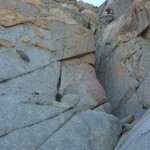