This is not the famous Crest in Yosemite, but an unofficially-named peak along the Glacier Divide, between Piute Pass and the Evolution Basin. It is a fairly long hike (22 miles and 5200 feet), but not technically challenging. The summit affords impressive views of Humphreys, Merriam, and Bear Creek Spire to the north, and the Black Divide to the south.

There was frost on people’s cars at the 6 AM start — apparently we don’t get a summer in the high country this year. It was good to see Bob J. again, since there have been too few Bobs so far, but had to to turn around and fetch his forgotten food, so we were soon down to the regulars. Six of us (I think) were doing Matthes, while others were doing Humphreys, Emerson, and Checkered Demon. We spread out a bit on the long, gentle climb to Piute Pass, but Bob, Tom, Michael and I reached the top nearly together. The giant snowbank still covered the last section of trail, but repeated sanding had melted a deep, broad trough.

We descended the west side of the pass together, then each took our own separate ways cross-country around Lower Golden Trout Lake, passing a rounded granite ridge to reach Packsaddle Lake. We regrouped to discuss the finer points of “Vertical Limit”, then all contoured high, and all lost: you really do have to drop down to the lake.

I saw a promising snow route through the talus nightmare below the peak, leading to a couloir on its east ridge. With minimal talus-hopping, we reached the snow and crampon-ed up. I noticed the others’ crampons were all much bigger than my tiny Kahtoolas, a fact that left me slightly worried.

The snow was fine through the first crux, a steep, shaded chute through a lower cliff band. My short spikes work great on hard snow at any angle where I don’t have to front-point. After traversing right over a small rock rib, I started climbing the main couloir to the ridge. Things got a bit desperate near the top, as the steeper snow there had softened, leaving a layer of slush on top of hard-pack — the worst conditions for my crampons. Some careful scrabbling got me to the ridge, which was easy class 2 talus to the summit, where I arrived around 10:30.

After perusing the register — a sparse document signed by the usual Smatko, Ross, Lilley and MacLeod, etc. — I found a sheltered seat and relaxed until Bob showed up, admiring the view of Desolation Lake and Mount Humphreys. Bob, wanting to make up time on Michael, paused just long enough to photograph the register, then set off in the opposite direction, down the west ridge. That should give the others something to think about.

We aimed for a snowfield north of the saddle, hoping for a nice glissade. Unfortunately, we had to bypass the too-steep top section, and the lower part was badly sun-cupped. Bob put on crampons, while I chose to practice my self-arrest skills. Lower down, the snow finally became smooth enough for a couple excellent boot glissade, and we followed it all the way to Packsaddle Lake.

From there, it could have been a straightforward 3-hour grind to the trailhead. However Bob, wanting to put some time into Michael, thought he should run the rest of the way. I was happy to do so, as Piute Pass drags on forever at a walk, so I took off at a comfortable pace and reached the parking lot at 2:15. Bob arrived somewhat later, but early enough to probably recapture the lead from Michael. Michael, however, got the last laugh, escaping by car with Bob’s pack. 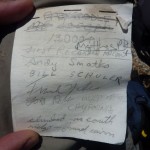 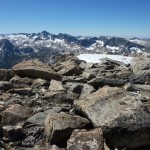 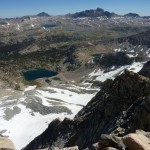 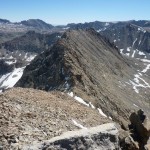 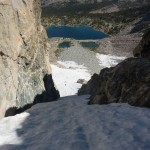 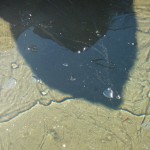 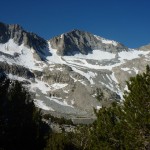 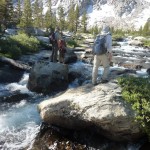 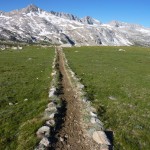 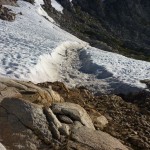 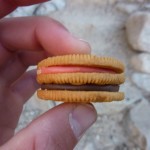