After missing the first day for a trip to Shasta, I was early for the second, pulling up at the trailhead before all but Karl. The Tamarack Lakes trailhead is non-obvious at night, and I had already blown by it once. As 6 AM approached, I saw a few of the regulars, as well as some new folks, one with an arm sling and a fancy-looking dSLR. It turns out that the Challenge may get some coverage from Backpacker magazine, and you, gentle reader(s), may get to see how a professional photographs this stuff.

“Tamarack Peak” is an unofficially-named peak near Bridgeport, and Crater Crest is the high point of an obscure nearby ridge, but such are the things in the Sierra that Bob has not climbed. We kept a moderate pace up the long, well-established trail to Tamarack Lake, but spiced things up a bit by getting off-trail and doing two gratuitous stream crossings, one easy and one somewhat trickier. If you head that way, remember to cross at the “Y” near a stream.

The trail fades beyond the lake, and we chose our various ways through the talus, woods, and snow to the highest lake below the peak. Bob was eying a nice-looking couloir leading just right of the summit, but having brought an axe but no crampons (d’oh!), that was not an option for me. Instead, I headed off west to tag the bonus peak (Crater) before returning to the main one, under the mistaken belief that the ridge high point was closer to the saddle. Four bumps later, I finally found a PVC pipe and a glass bottle on the far north end of the ridge, signed the little book, and began the long traverse back to Tamarack.

I passed Michael at the saddle, coming over after having tagged Tamarack from the south. While he had a higher trailhead, he also had 2000 feet of steep, loose scree on Tamarack, and a long return south along the ridge after Crater. It sounded like a bad deal to me, but Bob seemed worried about Michael gaining unrecoverable minutes.

Tamarack was just loose-ish talus from the west, so I put my head down and got to it, trying to catch some of the people ahead who had skipped Crater. The one I caught turned out to be the photographer, and since we happened to be in a good location, I stopped for a few minutes to model my small backpack. (It’s an ancient CamelBak Blowfish, for what that’s worth, and we’ve been through a lot together.)

There was quite a crowd on the summit, and we spent some time talking and posing for photos before Bob and some others pulled themselves away to climb Crater. Unlike most normal humans, the photographer was not repulsed by my summit fish (sardines in mustard sauce), clicking away as I mashed the skin, bones, guts and mustard sauce into a bread roll to make my salty treat. De-lish.

A clamber down the loose talus and a somewhat ill-advised glissade on small, hard suncups got me to the valley, where I eventually found a good trail and failed to lose it all the way to the trailhead in 6h30 — a short day. I had just enough time to wash up and start lunch (different fish) before Bob arrived and folded into his miniature car.

Reading the ingredients, Mike and I discovered that marshmallows are basically high-volume, super-cheap gels — fructose, glucose, dextrose, and other trace ingredients — with 4 marshmallows being roughly equivalent to one gel. Just for kicks, I took a small bag with me today, and while they didn’t fill me up, they did seem to provide energy. Now to figure out how to compress them… 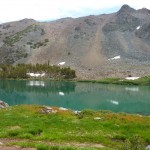 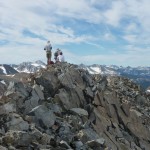 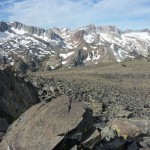 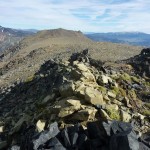 Crater is the far one 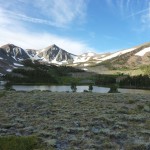 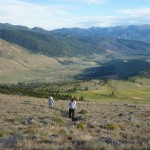 Climbing to the lake

This entry was posted in California, Nutrition, Sierra Challenge. Bookmark the permalink.