Mike and I loaded our packs with all the things the sign told us to bring — shovels, beacons, helmets, etc. — and got a conservative start from Bunny Flats at 1:30…

Oh, who am I kidding? After finding Lassen closed for trail maintenance (the whole mountain!), we drove up to Shasta, stopping by Taco Bell for lunch, threw food and water in our packs, tossed on axes and ‘pons, and took off at 1:30… PM.

Though the Avalanche Gulch route climbs almost straight toward the summit from the trailhead, the trail itself wanders off to the northwest, nearly flat at first, before doubling back and climbing to Horse Camp. This seemed absurd, but neither of us had been on the mountain before, so we played along.

Above Horse Camp, the trail turns into a long rock walkway, then a sandy, well-worn and -wanded path up scree and sand. We passed many parties on the way down, carrying their shovels, beacons, helmets, etc.

This late in the day, the snow was desperately slushy, so we avoided the snow-filled gully to our right. Eventually the talus ridge merged into the snow slope, and our feet were instantly soaked. As the slope steepened and we experienced more and more unpleasant slippage, we put on crampons just above a large, exposed moraine. Progress was still wet and cold, but at least the crampons often bit into the harder base below the surface slush.

We followed intermittent boot tracks and large glissade paths right of a large oval of exposed talus, then to the far right end of the Red Banks, a line of incredibly fragile-looking conglomerate. This was a long, tough slog, and here Mike, with his vastly better cardiovascular fitness, quickly cut my ego down to size as I panted and struggled my way to the ridge. I think the “right way” cuts through one of the gaps in the banks, but there was enough snow on the other side to skirt the steep part of the Banks and reach the base of “Misery Hill,” where we doffed crampons for the duration.

Said Hill was nowhere as miserable as I had expected — whoever named it had clearly never crossed University Pass — and we had a pleasant cruise up to the snowy summit plateau. Along the way, we passed two men preparing for the glissade. I was impressed by their equipment — bike helmet, cheap rain pants, ancient crampons — but we didn’t stop to talk for too long.

The summit plateau looks discouragingly long, but went by quickly, and we soon arrived at the fumaroles below the summit cone. I have smelled Mount Hood, and several hot springs, but Shasta is by far the worst-smelling: it’s not just rotten eggs, but peed-on rotten eggs. Gagging a bit, we slogged up a mixture of snow, mud, and talus to the summit. Our time of 3:45 was far from stellar, but still a respectable 2000 vertical feet per hour.

The view is breathtaking. To the south, you can see landmarks along the route, from the Red Banks, to the snow gully above Horse Camp, to (possibly) the trailhead itself. West is a large, crevassed glacier and part of Shastina. All around is the valley, 10,000 feet below. Looking farther, clouds obscured the view of Lassen, but Eddy and (barely) the Trinity Alps were visible to the west, and the next volcano in the chain to the north.

We made quick time to the Banks, then took out axes for the glissade. This was Mike’s first glissade, but not surprisingly, he took to it instantly — it’s way easier than alpine sledding. The snow was too soft to truly fly down the chutes, but we still lost at least 1500 feet in 10 minutes.

Near the end of the glissade, we again caught one of the pair we saw on our way up. He wore a fireman’s helmet and slicks (being, in fact, a fireman), and slid on a large piece of the plastic that construction workers use to protect buildings. I complimented him on his sensible, repurposed gear, a sign that he shared the spirit of dirtbag mountaineering.

While he waited for his partner to catch up, we continued shoe-skating down the snow gully. Instead of traipsing over to Horse Camp and back, we picked a route along the gully, then along the floor of the ravine below it. The forest is open and free of undergrowth, and we easily found the trail just a few hundred yards from where it turns down to the trailhead. We reached the car in almost exactly 6 hours, with plenty of daylight to spare, and relaxed and cleaned up before heading into town in search of greasy pizza.

There is a rat’s nest of dirt forest service roads below Bunny Flats, with plenty of excellent free camping to be had, and plenty of campers availing themselves of it. 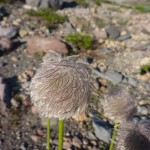 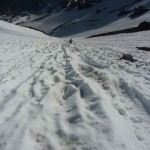 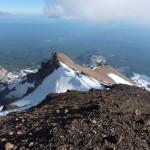 South from above Misery Hill 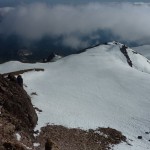 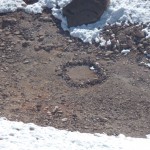 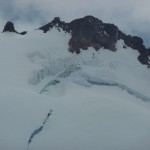 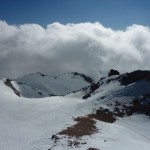 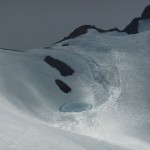 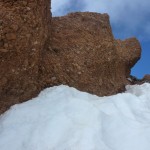 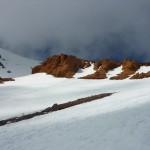 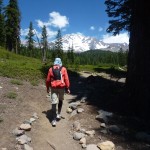 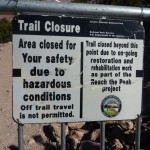 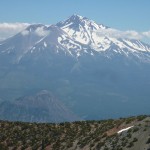