In an effort to broaden my horizons and remind myself why I prefer day-hikes, I spent three nights far from home/car, practicing my limited camping skills. It wasn’t the most efficient way to bag peaks, but I enjoyed it more than I expected, and even slept relatively well, a rarity for me. I also learned important things, like “if you don’t bring a lighter, you won’t be able to use your stove,” and “3,000 cal/day looks like a lot of food, but it really isn’t, and you will be hungry.”

After a cold, frozen-dewy night at Charlotte Lake, we made our way along the northeast side of the canyon toward the always-impressive Charlotte Dome, then up a gully to Mount Gardiner. The side-hilling down the canyon was annoying, and the route was forgettable sand and talus until the final traverse. From the south summit, the difficulty bumps up to class 3 while crossing a notch, then spicy class 3-4 while traversing west to the summit.

The summit view of Gardiner’s various vertiginous north-facing walls was impressive. Sadly, Gardiner’s historic summit register was stolen sometime in the last year, one of a large number of recent register thefts. We hung out for awhile on the summit, and Tom and I even devised an awesome new backcountry food unit: two “cheese” sandwich crackers with a piece of actual cheese in between.

After retracing our steps to the south summit, the others returned to camp, while I dropped down the northeast couloir to the mostly-frozen Gardiner Lakes. From there, it was a long boulder maze to the base of Mount Cotter’s summit block, then a short class 3 scramble to the summit. Even the obscure Cotter’s register had been stolen.

It was easy going down the sand and slabs to the east into 60 Lakes Basin. However, enough snow remained to mostly cover the trail through the basin, and the mixture of suncups, mud, and streams slowed me down considerably. I had expected a quick trail cruise back to camp, but the north side of Glen Pass was also still mostly snow-covered, forcing me to choose between suncups and talus.

Fortunately, the south side of the pass was mostly clear. After talking to a couple leading a large group of kids camped below the pass, I cruised back to camp around 6:30, taking an excellent shortcut from the base of the pass directly to Charlotte Lake.

Painted Lady rises in an impressive face above the south end of the Rae Lakes. Like many ladies, however, this one is much more attractive when viewed from one side. From the west below Glen Pass, she is a small talus pile and an easy climb.

While packing from Charlotte to Rae lakes, Tom and I dropped our packs to climb Painted Lady and, possibly, Rixford. The talus wasn’t as bad as imagined, and we were soon on the summit. However, the ridge to Rixford still had steep snow in the gully used to bypass a steep step, so we forewent the traverse and returned to our packs.

Some snowy hiking and one exciting log crossing later, we were surprisingly alone at the popular Charlotte Lakes camping area. This was a disappointingly easy and inefficient day, but there were no other obvious nearby objectives, and I was not feeling all that energetic.

The next morning, Tom and I set out for Clarence King, which I had attempted to reach as a dayhike some years ago. The climb is mostly a really long class 1-2 approach, with a short, spicy finish.

Summiting Clarence King has two tricky sections. The first is a wide vertical crack to the right followed by an upward-sloping squeeze chimney. The crack is maybe 8 feet high, widening from foot- to knee-width, with sharp sides, and is not terribly exposed. The squeeze chimney is, like all off-width climbing, extremely awkward and ugly, but not hazardous.

After a bit more wandering, you reach the second difficulty. The summit block, perhaps 20-30 feet high, lies against another angled block to its south. To reach the V-shaped junction, you must lieback and jam up a separate 8-10 foot flake, then work your way another few feet up into the junction via jams and pulling on some fixed tat. The final move is a single mantle from the V to the top of the summit block, with decent hands and a dubious foot. Unfortunately, neither Tom nor I was feeling it — I might have gone for it in rock shoes, but I can’t say for sure.

After a disappointing day, I decided to pack out rather than hang around for another night. With the crazy bighorn sheep closures finally gone, Dragon Pass provides a faster, more direct way from Rae Lakes to Onion Valley than Glen and Kearsarge. However, it’s not easy, especially with a full pack.

A surprisingly good use trail takes one to Dragon Lake, with spectacular views of Dragon and Dragon’s Tooth. From there, a short section of super-frustrating loose sand and some talus take you to the ridge. The pall of smoke suddenly visible in the Owens Valley was somewhat disturbing. The route I chose involved some surprisingly spicy downclimbing over one bump on the ridge and down to the east of Dragon’s Tooth, though there may be a slightly easier way. 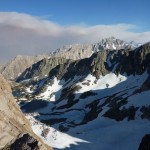 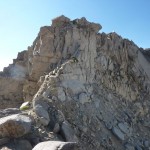 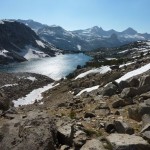 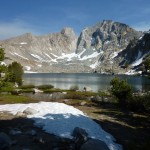 Dragon Lake with Tooth and Dragon 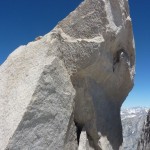 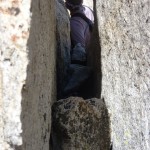 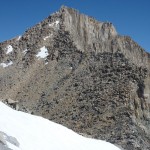 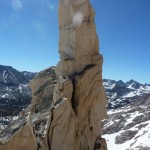 Thumb on the way to Clarence King 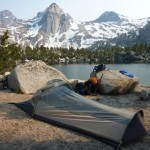 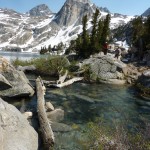 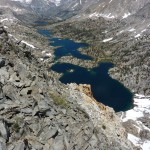 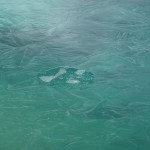 Skim of ice below Glen Pass 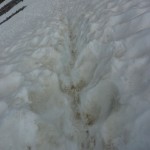 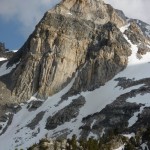 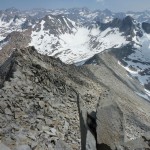 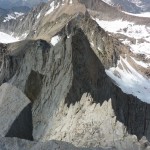 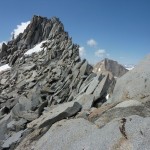 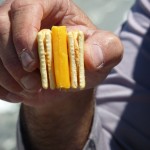 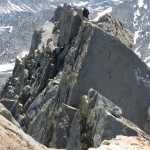 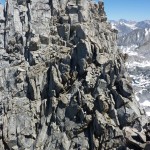 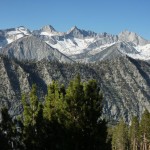 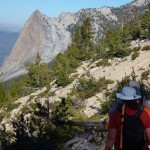