Nevada should give Boundary Peak back to California and make Wheeler its high point. The former is a bump on California’s Mount Montgomery’s northeast ridge. The latter is an island of alpine tundra between two basins 8000 feet below — a classic Nevada geographic feature — and the centerpiece of Great Basin National Park.

GBNP wasn’t far (by Nevada standards) from my direct route, so I decided to stop by and tag the summit. Also, since the trailhead is just over 10,000 feet, sleeping there would help me acclimatize for the Sierra. It was refreshing to finally stop somewhere without mosquitoes, and to wake in an aspen grove perched 5000 feet above a desert basin.

I had a fun run-walk along the trail to tree-line on the ridge, passing one hiker who had started a bit earlier. From there, the trail deteriorated somewhat, and the remarkably strong wind began. I guess that the sun warms the eastern and western valleys differently, causing a pressure difference that can only be resolved by violent wind from the west. The wind is reliable enough that there were many wind shelters on the ridge, some of them quite elaborate.

I reached the summit in good time, finding a nice register book in a mailbox, along with a cold, hungry hiker. I offered him part of my peanut butter and Nutella sandwich, and as he ate, he told me about his less-than-effective predawn start, which led to his losing the trail and slogging up windy talus, ducking behind boulders and shelters to hide from the wind.

The wind was even stronger as my new companion and I started down. Conversation was impossible, and it was sometimes necessary to stop and brace oneself to avoid being blown over on the talus. Once below the ridge, we had an enjoyable conversation about hiking, road trips, cheap living, and even computers (I meet a lot of programmers out here). 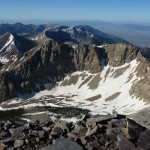 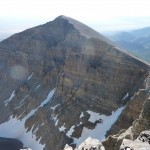 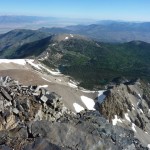 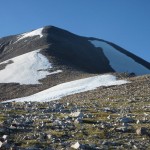 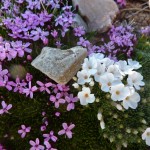 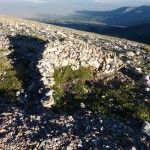 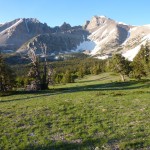 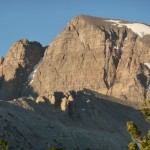 One response to “Mount Wheeler (NV)”