Symmetry Spire (and a slight setback)

Symmetry Spire is a classic Teton climbing area, on which early and famous climbers tested their mettle. Noah wanted to climb it, and it seemed like a good moderate objective for my last Teton outing this season, so I once again put on the heavy pack full of gear and biked up to Jenny Lake.

The approach follows the Cascade Canyon trail just past Inspiration Point, then turns right up the Symmetry Couloir, a steep scramble that is now almost entirely filled with snow. The snow was consolidated but not icy — perfect for crampons, but navigable with shoes and an axe. We made our way carefully to where the gully narrowed, trying with more or less success to bypass the snow on the rocky sides.

In at least two places, the cascade running down the couloir had broken through the snow, forcing us to cross the moat and bypass the water via dirt, brush, and often-wet rock to one side. On the second such place, we were forced onto a series of sloping, wet steps to the right of the water. Topping out on the ledges, my foot lost traction in a muddy crack; unable to hold on with my hands, I slowly toppled down the rocks.

The whole fall was maybe 30 vertical feet, split into four or five steps. I unfortunately started rotating, turning head-first after a couple of steps. Fortunately, I came to rest in a small tributary stream, rather than tumbling into a moat or landing on the snow. The rational part of me noted that falling head-first was bad, and tried to stay away from the center of the couloir; the language part only managed a few useless obscenities.

I sat in the stream for maybe 10-20 seconds, assessing my condition. My face felt stiff around my left eye, and there was some blood there. My left thigh ached, the left leg of my new nylon pants was shredded, and a granola bar wrapper had escaped from the ruined pocket, but my femur and kneecap were fine. I had a couple of cuts on my right shin, but they were no worse than the usual bang-up from scree. After collecting myself, I signaled a thumbs-up to Noah, collected my hat, carefully climbed to one side of the stream, set my pack in the brush, and had a seat.

Noah made his way cautiously back down the steps, and I immediately asked him to check my pupils for signs of a concussion; thankfully, they looked about right for bright sunlight on snow. The worst-looking injury was probably the short, relatively deep cut in my scalp.

We sat for a few minutes as I got over the rush of adrenaline in my system; my hand shook when I flexed my arm, and I was slightly dazed. As my quadriceps stiffened from the bruise on my thigh, I thought it would be best to start moving. I gave Noah the rope, and he found a suitable tree for a rappel down to the snow while I put on my harness and collected myself. With a fireman’s belay for safety, I made a careful rappel to a flat spot and pulled the rope, grateful that Noah offered to carry it.

After leashing my axe, I began a slow, careful descent. Since both my left leg and right ankle were stiff, I had to take small side-steps with the left leg forward, which was slow and undoubtedly boring for Noah. I was still evidently recovering from the adrenaline rush, so my emotions were pretty out of whack, but I was reassuringly able to speak and plan normally. We made for the shuttle-boat dock, hoping to bum a ride across the lake to save a two-mile walk.

Of the five or six groups of tourists we met on the trail, and the 20 or more people leaving the shuttle-boat, only one person mentioned noticing that I had fallen and, after some other conversation, was surprisingly nonchalant:

The shuttle employees were generally more attentive and helpful than the tourists, and didn’t charge us for the ride. From there, it was a short walk and a 3-mile bike to the ranch, where I could clean up and practice my amateur medic skills with the first aid kit.

Total damage: a gash above my left eye; smaller cuts on my cheek, chin, forearms, hands, and right shin; a large bruise and abrasions on my left thigh; and a slightly swollen or sprained right ankle. Also, a bummer of a last day in the Tetons. I am most concerned about the thigh and ankle, which could keep me from running and hiking the longest. Could be worse. 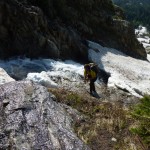