Irene’s arete is the most picturesque fin on the north side of Garnet Canyon. I was first struck by it when climbing the Grand last year, and envious of a pair I met who were about to climb it, so when Noah suggested we climb it, I jumped at the chance. He could rope-gun the hard parts, and I could practice my trad leading.

Since we didn’t want to climb with gloves, and the snow is no longer freezing up high anyways, we got a late-ish start. After thrashing our way up slush to the base of the route, we started climbing around 10:15. Since the first two pitches were 5.7 and 5.8, I opted to lead the first.

P1 started out with some mellow cracks that were easily protected, and I felt confident. However, rather than turning toward the dirt and low-angle cracks to the right, I went left to the arete, and found myself in spicier terrain. I placed a dubious cam, moved up, placed a medium-sized nut at head-height, and attempted some delicate face moves just right of the arete, aiming for a mass of tat a bit farther up. After losing a foot and taking a short fall on the nut, I figured out a step around the arete, which led eventually to a gear placement. Relieved, I tied into the tat and belayed Noah up.

Since things looked decidedly harder above, we made a short rappel onto the right side to what was probably the actual start of P2. Noah led P2 up the right side of the arete, through a somewhat tricky sequence over a tooth-shaped protrusion, to a spacious ledge that wrapped around to the left side.

I led P3, which started off up parallel cracks on the left, ending at a tat-decorated ledge on the arete. I could have belayed comfortably here, but the route description suggested that this was a long pitch. Since it still looked like I had plenty of rope left, I continued up cracks in a golden face on the right side of the arete until Noah started making noises about running out of rope. I was also running out of usable cams. I gunned it to a small ledge and made an anchor with about 10 feet of rope to spare.

P4 started out easier, then went through some steep but well-featured black rock. I felt Noah taking his time somewhere, which displeased me on my tiny perch. All became clear, however, when I followed across a short, sloping traverse partway up. I gave silent thanks that I had not led, then climbed on to a decent-sized belay ledge.

After a short scramble into a cleft with trees, Noah led P6, a short “5.8” crack that felt more like 5.9, to 4th-class terrain. This mini-pitch consisted of sustained, steep hand-jams with some awkward feet, finishing with a writhe through a wider crack.

After topping out, we stomped and postholed up Disappointment Peak for good views of the central peaks, the old Teton Glacier moraine, and the Koven couloir. We descended the spoon couloir to Amphitheater lake and the Garnet Canyon trail, passing two tourists in t-shirts and sneakers just below the lake. I’m impressed they made it so far, and hope they didn’t get hurt too badly on the way down.

Irene’s Arete was a much better climb than Guide’s Wall (at least the way we did it), with sustained difficulty, varied and interesting climbing, and awesome views and position. If you climb 5.8 and find yourself in the Tetons, get a rope and get on it. 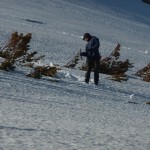 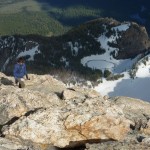 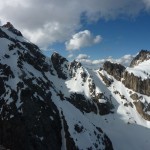 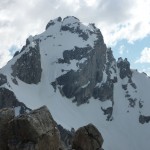 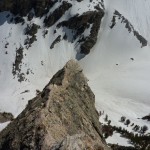 Back down arete from top-out on P5. 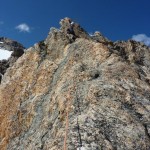 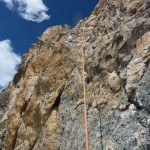 Climbing to arete on P5 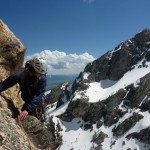 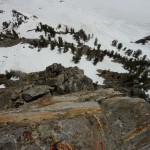 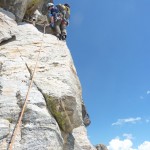 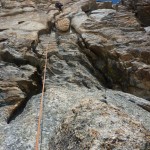 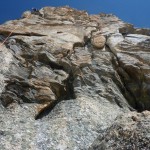 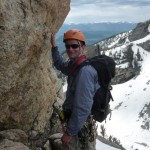 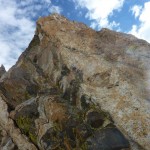 Looking up P1 from the start 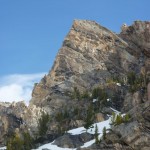 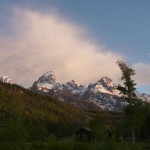 Sunrise for the day