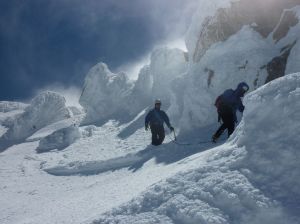 At the start of summer, I somehow found myself climbing the Grand in the winter. While I had descended the Owen-Spalding route last year with some snow and ice but no major difficulties, the addition of much more snow and rime this time made it Serious Business.

Erin, Keith and I left the ranch at the lousy hour of 3 AM, carrying all kinds of climbing paraphernalia, including a rack and — most importantly, for the rappel — two ropes. We made good time to the meadows, somewhat surprised that none of the snow had frozen overnight. Unlike the past few nights, when the snow had frozen all the way to the valley, an inversion had kept temperatures above freezing most of the way to the lower saddle at 11,500 feet. Fortunately, an Exum guided party had installed a beautiful boot-pack the previous day, so we were able to maintain a good pace to the saddle.

The Lower Saddle was, as always, unpleasantly cold and windy, and the Exum huts had not been erected for the season. We followed the guided party’s footsteps toward the many named features between the Lower and Upper Saddles. The Grand Teton must have more named features per vertical foot than almost any other mountain, with at least the Black Dike, Needle (and Eye Thereof), and “Idaho Express” just on the hike between the two saddles. In any case, we saw the party headed down around the Black Dike, then saw their tracks end around the Needle. It seemed pointless to me for them to even try to summit in the current conditions, but equally so to turn around before 8:00 AM.

Above the saddle’s wind tunnel, we continued breaking trail up boot-packable snow. Though we attempted to share the trail-breaking work, Keith’s extra muscles kept him postholing in anyone else’s steps. One point for the beanstalk people. With a combination of past experience and dumb luck, we took the correct route to the upper saddle, where we got our first look at the hard part of the route.

Erin and Keith roped up at the saddle, while I decided to see how I felt soloing. I was glad to have Keith along at this point: I know enough not to get someone killed on a rope, but I’m slow and awkward climbing that way, while Keith’s more of a pro. I had intended for us to solo the climb and use the ropes only for rappels, but it turned out that conditions were hairy enough for Erin to need the psychological protection of a rope.

Unlike last year, the Belly Crawl lived up to its name. Without snow, it is a simple hand traverse, with generous feet and a nice positive crack. With snow packing the crack and footholds, it was a bit more intense; cramming my axe handle into the crack and scrabbling around with my outside foot eventually got me across. Keith then showed how it should be done, taking the time to wipe snow off the footholds for an axe-and-hand traverse.

The crawl proved to be the psychological crux. The chimneys were partly filled with a mixture of packed snow and ice, but that probably made them a bit easier, as I was often able to bury an axe shaft in the snow or stick the point in solid ice. As we approached the summit, the snow and rime became thicker and obscured more features. Excavating solid features to climb took more and more time, and sections that were cakewalks in the summer, like the exposed Catwalk, became unpalatable.

After seemingly endless climbing — roped climbing is always slow — we reached the summit, where we found ski tracks from someone who had probably climbed and skied the Stettner couloir on the southeast side. We were fortunate enough to be near the top of the patchy cloud layer, though we never saw Owen, Teewinot, or anything to the east. While the local scenery was impressive, I was once again denied the summit view.

Descending the Owen-Spalding supposedly requires only a single 120-foot rappel, but we managed to make things much more complicated. I found a big pile of tat — six slings and three rap rings — just south of the Catwalk, and assumed it must be the main rap station. Instead, it dropped us maybe 60′ down a sloping gully to another snowfield. One of the ropes tied a bight in itself while being pulled, so I had to solo partway back up the gully to grab the other end, untie it, and rap down the remaining rope.

Meanwhile, Keith found an even larger mass of tat above the actual 120-foot rappel, though it required an exposed move to clip in. The rappel itself was a bit tricky as well, with an awkward, sideways start, a traverse across a snowfield, and a free-hanging section where one had to fend off the right wall as best one could.

The late descent made the snow above the upper saddle somewhat sketchy, though we didn’t see or cause any slides. There was another guided party at the saddle; if they somehow manage to summit today, they will have perfect weather. Below the saddle, we had two epic glissades to the meadow, with moderate slush in between. I even rode a small wet slide most of the way into the meadow, doing my part for avalanche control. Despite dire warnings about avalanche danger, a bit of common sense seems enough to stay in areas where slides are wet, shallow, and harmless. 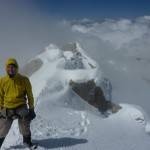 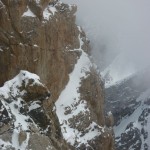 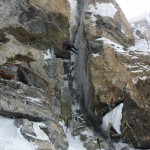 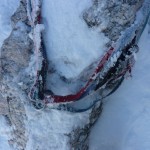 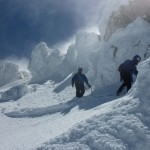 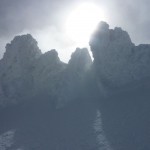 Rime near the top 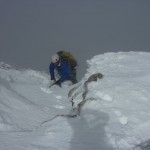 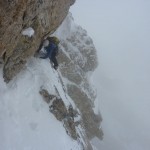 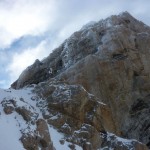 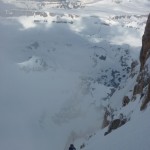 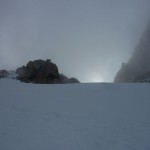 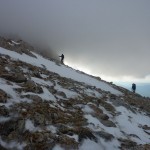 Near the lower saddle 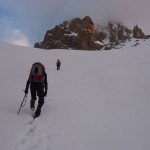 One response to “Grand Teton (Owen-Spalding)”