Looking forward to more days of rain (and possibly snow in the high country), I got out with Noah to do the Middle Teton glacier route. In the summer, it’s talus, then snow, then a low 5th-class rock finish; I assumed it would be mostly snow now, but wasn’t sure what the rock would look like. After a previous “climb” with lots of climbing gear that turned into a hike with a heavy pack, I was glad to be back to my normal lightweight style: axe and ‘pons, food and water, minimal warm clothing, and essentials.

After a sufficiently-early 4 AM start, we hit solid snow 3-4 switchbacks up toward Garnet Canyon, and put on crampons to shortcut the rest of the annoying switchbacks. It had been a cold night, and the snow was perfect styrofoam. Hiking up Garnet with a perfect view of the Middle Teton ahead, we caught a trio of skiers headed for the Ellingwood Couloir, and somehow missed some friends headed for a different route on the Middle at nearly the same time.

Wind gusts through upper Garnet Canyon kicked up the fresh snow, adding a “hard-core” atmosphere to what was actually a comfortable hike on hard snow. At the glacier’s mouth, just below the Lower Saddle headwall, we met a skier and snowboarder descending the glacier route. The hard crust that made our climb so pleasant was not to the boarder’s liking, but he had still done admirable work cleaning fresh snow off the crust for our climb. Who knew snowboarders could be beneficial?

The climb starts out moderate, then steepens as it turns right toward the saddle with Dike Pinnacle. Having two tools would have made me feel cooler, but I was still comfortable daggering my mountaineering axe with one hand and punching the snow with the other while front-pointing toward the ridge. The view from the ridge was stunning, with Dike Pinnacle’s intimidating summit to the east, the Grand to the north, and the heavily-rimed peaks around South Teton to the south.

Once Noah caught up, we continued west up the ridge toward Middle Teton’s summit, which looked much closer than it was. The snow steepened considerably as we neared the two summit blocks. I incorrectly guessed that the south was the true summit (less reading the route means more adventure!), and carefully kicked some steps up some very steep snow. To my consternation, I found that the northern summit was a few feet higher, only 50 feet away, and separated from my perch by an overhanging notch.

After carefully downclimbing my excellent route to nowhere, I took stock of the options. From the cleft, it seemed like easy climbing to the summit, but reaching it required climbing either a steep runnel or one of its similarly-steep sides. The alternative was to downclimb a ways, traverse north, and climb a snow slope with a slide-y snow-on-slab look to it. I chose the runnel and, with only a bit of desperate hooking and hacking, reached the cleft and summit.

While waiting for Noah, I chopped out a sheltered platform, spread out my garbage bag, and had a sandwich. Although he is a much stronger rock and ice climber than I am when attached to a rope, climbing unroped requires a bit of attitude adjustment, and Noah was taking some time being adjusted. With a bit of experiment and encouragement, he reached the cleft from the south side of the runnel, then made the summit just ahead of the afternoon’s clouds.

After descending the southwest gully on firm snow, we encountered increasingly annoying snow conditions in south Garnet Canyon. We passed from heavy drifted powder, to thin powder over intermittent sheets of ice, to calf-deep slush on our way down to the Meadows. Just after turning out of Garnet Canyon, we found an awesome boot-ski shortcut that bypassed all the switchbacks and deposited us at the head of Burnt Wagon Gulch with only minimal erosion damage. Unfortunately the low-elevation snow is melting fast, so these shortcuts probably won’t last.

If you want your gaiters to last longer, cut two boot-width strips of tubular webbing and put them in the center of the heel straps. That way you’ll wear through the webbing rather than the often-irreplaceable strap, which is usually the first piece to go.

For people carrying large packs who wonder what I stuff in my Camelbak, this is a list of what I carry and wear on a typical outing. This stuff is good down to maybe 20 degrees, and for up to 12-16 hours. 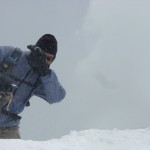 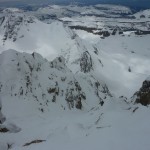 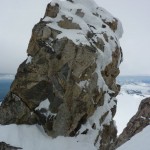 The bad summit and cleft. 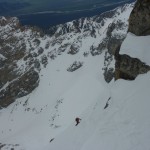 Noah climbing toward the crux. 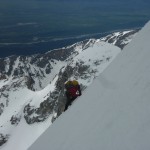 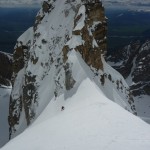 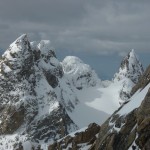 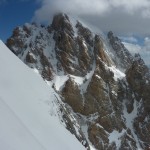 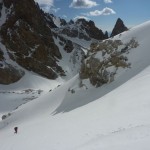 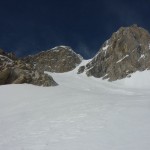 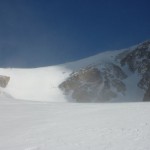 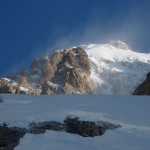 Wind on the Grand 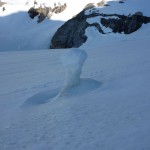 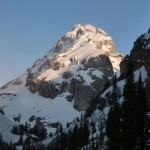