Around the ranch, and Teewinot

Looking down the Apex

With work week over, I finally have a bit of time to write and climb. Despite a standard forecast of “partly cloudy with a chance of showers” (which should sound familiar to anyone from NM or CO), I decided to cruise up Teewinot to see what I could see. It’s about one vertical mile with a short approach. When I climbed it last July, it was mostly class 3-4 rock with a few snow patches to cross. This time, however, there was snow for probably the top 4000 feet, consolidated below treeline and either scoured clean or deep and slushy above.

The right way to do this would have been to climb to the “Apex” at treeline, continue upward to the prominent Idol and Worshiper formations, then trend right, following the avalanche gully in which the slush had been scoured away. However, through a mixture of fog and general incompetence, I found myself a few fingers south of the summit, after slogging up endless knee-deep slush.

Getting to the summit required slush traverses mixed with “interesting” rock, which I chose to climb in crampons to make it even more “interesting.” I knew that crampons were predictable on rock, probably more-so than mountaineering boots when said rock is wet, so they probably didn’t make things much more difficult. The shifting clouds produced some interesting photos along the way, though the summit views were nothing like last time, when I had a clear view of the Grand and Owen.

I found the right way up on the descent, a deep gouge in the snow where rock- and snow-fall had scoured away the cursed slush. It didn’t help me much on the way down, but it was probably faster than downclimbing class 3-4 rock. Once things leveled out a bit, a glissade accompanied by beachball-sized snowballs and some running plunge-steps got me back to the car in 1h30 total. Not bad.

Staying at the ranch is cheap, and you get more or less what you pay for: a bare wooden bunk in a cabin, free showers, and an outdoor covered area to cook. Ice and laundry are extra, but cheap. You also have access to a small library with some real treasures (e.g. Whymper’s book on his Matterhorn first ascent) and a wood stove, and a chance to meet some interesting characters.

I probably wouldn’t pay the full non-AAC price to stay at the ranch, but fortunately I don’t have to, thanks to work week. In exchange for a week of construction work, one can stay free for the rest of June. It’s still early for climbing — especially with this year’s above-average snowpack — but 3 weeks’ lodging in exchange for 40 hours’ unskilled labor is a pretty good deal. Of course, it’s not just construction work, but a chance to meet climbers and other characters who have been helping to maintain and run the place, some of them for decades.

Plus, where else can you see a bear in your yard, a bald eagles on your run, and the Grand Teton from your toilet? 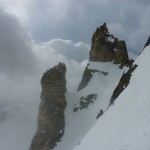 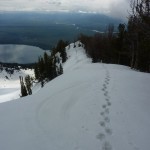 Looking down the Apex 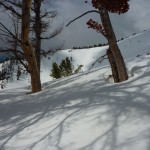 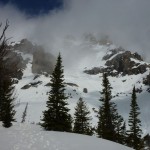 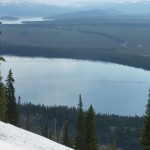 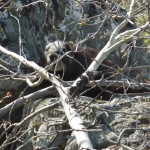 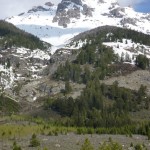 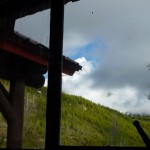 View from the loo 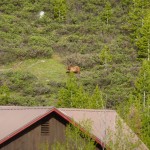 One response to “Around the ranch, and Teewinot”