Does this thing still work? If you’re reading this, then apparently it does. Thanks to epic spring laziness on my part, I won’t be doing anything fast before this fall, making this a season for long, slow things. More on that later, perhaps. The late snowpack in many ranges may also complicate my itinerary.

I chose Ouray Peak as a warm-up because I had driven past it many times on the way to other peaks, and it wasn’t far out of the way. Besides, at 13,971′, it almost counts as a 14er. The climbing was lackluster, as it’s a typical Sawatch rockpile, and there wasn’t enough snow to merit using the axe and crampons I brought. The views to the north and west were impressive, showing just how much snow remains in the San Juans and central Colorado mountains, but the Sangres were completely obscured by smoke or blowing dust, just as they were on the drive up the night before. 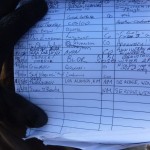 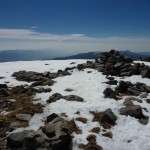 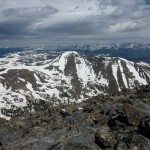 View north to the other Sawatch 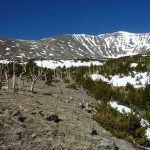 ]
This entry was posted in Colorado. Bookmark the permalink.