Keeping busy in the off season

This time of year is awkward in the hills, with cold temperature and poor or difficult snow conditions. Typical activities involve a mixture of training, doing smaller objectives, and going insane.

Postholing for fun and profit (or fitness and pain)

It’s prime postholing season in the mountains, with lots of fresh, unconsolidated snow, but usually not enough to create a significant avalanche risk. This is great if you want to get a good workout, but not so good if you want to get anywhere. Approaches you could drive or jog in the late spring or summer now require hours of laborious slogging. There’s still steep stuff to be climbed — both rock and ice — but it’s hard to climb it in a (short, winter) day.

So you either stay out of the hills or lower your expectations, try to enjoy the scenery, and pretend to be the patient person you aren’t. Here is some typical slogging near Mammoth Lakes:

Mammoth is famous for the massive amounts of snow it receives; while the White Mountains got almost nothing out of the last storm, Mammoth got several feet of powder light enough to make snowshoes almost useless.

Many of the trailheads become much less convenient. While you can drive to North Lake (9400′) in the summer, the road is closed about 1000 feet and two miles down in the winter; South Lake is even worse. This makes most peaks out of Bishop multi-day outings. To get a sense of just how bad it is, I wandered up toward Piute Pass the other day. Moving at a decent pace but breaking trail the whole way, it took almost four hours to reach Loch Leven from Aspendell. Things started out easy enough: 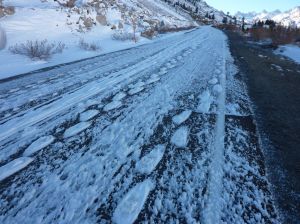 Then the snow got serious, and things got slow: 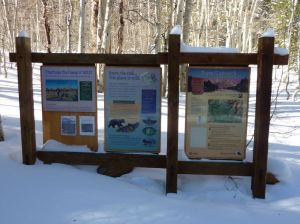 The log crossings were tricky in snowshoes, but evidently popular with local critters:

Fortunately, the previous day’s insane wind had packed some of the upper parts enough for snowshoes to be useful:

The lake was frozen solid, and already shaded at 1:30 PM: 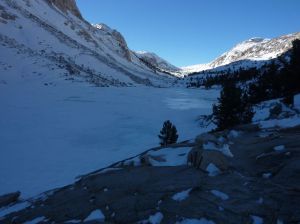 The pass looked far away, and most of the route was already in the shade as well, so I decided I had had enough. Emerson and the Piute Crags look like reasonable day-hikes, possibly featuring a bit of mixed climbing, but anything beyond the pass would require significant headlamp time.

Approaches to Mount Whitney are similarly slow. Unlike at Aspendell, there is no gate, just a “road closed” sign that people drive around, so I easily drove my 4WD to just above the Meysan Lakes trailhead, and probably could have reached the portal with a bit of daring:

The south-facing start of the main Whitney trail is melting quickly, but the north fork of Lone Pine Creek is not. In particular, the ledges below Lower Boy Scout Lake are covered in treacherous snow and ice, and there is barely enough snow to take the winter bypass on the south side of the creek:

I was able to stomp out steps with my snowshoes, and claw at the rock a bit, but it was slow going:

Stomping steps up the slab

A slip would result in a cold but harmless slide back to the base — it’s not steep enough for you to pick up much speed, but there’s no way to self-arrest:

Taking the fast way down

I’m not much of a crag climber, but I had some fun in the Alabama hills, which have lots of short, easy sport-bolted routes. Of course, I climbed with proper equipment and the utmost concern for safety:

Taking the fast way down

Stomping steps up the slab