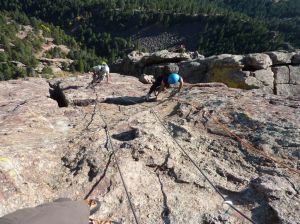 Rope highway on the 3rd

Some climbers I met yesterday recommended Eldorado Canyon for some good moderate solos, so I drove on over to check it out. Unfortunately, Eldorado is a state park, which means my parks pass doesn’t cover the $6/day parking fee. $6 isn’t that much, but I left on principle — there’s plenty of free fun to be had in the flatirons.

I started off with the little-traveled left side of the third flatiron, one of the longest climbs in the area. It starts out mellow, but turns smooth and friction-y while traversing left of a roof. Going straight over the roof is supposedly 5.7, but I chose to go around. From there, the route is slightly steeper than the standard route, but generally feature-ful, with a cool position near the south edge of the flatiron. I had the rock to myself until I merged with the standard route for the final pitch. What a difference between weekdays and weekends! There were two parties on the summit when I was there, and no fewer than three ropes on the final pitch as I descended.

After climbing off, I hiked around for another lap on the standard route. While I was putting on my shoes, a girl nearby chickened out about following the first pitch (it seemed like her first climb). She pulled the rope, and I retrieved a couple draws on my way by. I pseudo-speed-climbed the rest of the route, finishing in about 12 minutes. There was, of course, more chaos on top and on the route. One party, thinking it was a sport climb, did not have any pro. I showed the follower how to remove a cam left for their benefit by another party on the final pitch. Yikes.

Another climber on the summit mentioned a nice route on the edge of the fifth flatiron, so I headed over to Royal Arch to check it out. I got lazy, though, and just took some pictures of the arch before heading back. For some reason, I recovered enough to cruise the second and first flatirons on the way back. The first was surprisingly uncrowded until the very top, where there were eight or so people roped together in bizarre ways (e.g. one guy prussiked to the middle of a rope). I enjoyed the chaos for a moment, then downclimbed before their rappels got in the way. I met a couple of fairly strong climbers on the way down; impressively, although it was her first solo, she seemed more focused than frightened.

Start of the 3rd flatiron’s left side

Rope highway on the 3rd