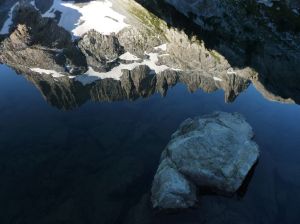 Or, “Dr. Dirtbag gets his ass handed to him by the Minarets.” It was “epic,” I guess, but not in the “dude, that was totally epic” sense; few peaks, much tricky climbing, and a fair helping of fear.

The Minarets are a prominent, serrated ridge west of Mammoth Mountain. There are 13 to 17 named summits, depending on how you count, the highest being Clyde Minaret. All of them are challenging, with the easiest routes mostly ranging from class 4 to 5.6. The ridge has been traversed in a single day several times, but the Minaret traverse is one of the harder Sierra traverses. Knowing I didn’t have a chance at completing the whole traverse, my plan was to start with Ken (south of Clyde), traverse Clyde, Eichorn, and Michael, then if things looked good, continue north, climbing what I could.

I got a lazy alpine start from Agnew Meadows at 6 AM. Red’s Meadow is a better starting point for the full traverse, but both meadows are nearly equidistant from Cecile Lake, and I slightly prefer the trail from Agnew. The water there, however, is almost undrinkably metallic and foul.

The trail past Ediza was familiar and forgettable, but Iceberg Lake was in prime picture-taking condition, so I spent some time playing with my camera. I got some drinkable water at Cecile Lake, then headed southwest to South Notch. Where it was in the sun, the permanent snowfield below the notch was soft enough to kick steps in the less-steep areas.

Since it is so close to the notch and supposedly 4th class by its north face, I gave in to temptation and decided to tag Kehrlein Minaret first. Getting to the rock was a bit of a challenge: I had to spend quite awhile chipping steps with a sharp rock to get across the steeper, shadowed snow to the closest rock. Once there, I took what looked like the easiest route up a rightward-trending chute with broken blocks toward western summit. It seemed harder than class 4 to me, but with some flailing I reached the gap south of the summit, and from there it was a straightforward climb.

I sat for awhile while recovering from such a struggle on a “class 4” route and fighting with the register canister before starting down the northwest ridge. If you climb Kehrlein, bring a hammer or large pliers (or someone stronger than me), because the register canister seems to be stuck. There are some truly intimidating pinnacles along the ridge to the east. The northwest ridge felt more like class 3 than class 4, and I was soon at South Notch. This was the pattern for the day: supposedly 4th class routes varied wildly in difficulty, from 3rd to 5th.

Since the ridge from the notch to Ken requires rappels, I came at it from the Clyde-Ken couloir. After a bit of fun climbing a tower southwest of the notch, I dropped down to the snow, then carefully made my way along its boundary with the rock until the slope lessened enough to kick steps. Along the way, I found a full 60-meter rope hanging from a notch north of the Notch, with an old carabiner on the end. Apparently someone coming home late had trouble getting down the hard snow, and had to abandon some good gear.

The couloir started as a miserable pile of loose talus, but turned into a fun 4th class climb after leaving the couloir to the left. A band of lighter-colored rock was particularly pleasant. I (mistakenly, as it turned out) angled right to the gap at the top of the couloir, which has an impressive view of Michael Minaret.

From the gap, I followed the ridge for awhile, then contoured along the west side on talus and blocks. There are several pinnacles on the ridge; the true summit can be recognized by a white rappel sling around the highest block. Unfortunately, by the time I saw the sling, the west side had steepened considerably, and despite much wasted time, I could not find a way up the face to the summit ridge. I had climbed pretty close to the limit of what I could safely reverse, so the downclimb was slow, exhausting, difficult, and sometimes frightening.

I headed back north, regained the ridge, and found that the climb is in fact 4th class if you stay near the top of the ridge. If you stay left of the gap, you reach the ridge without trouble. The two short chimney sections just below the summit are stiff, though, and require some desperate stemming; it looked like many parties rappel down and perhaps even rope up.

After returning to the Clyde-Ken saddle, I traversed over blocks and loose talus to the chute below the Clyde-Eichorn saddle, then headed up. The flailing on Ken had taken more out of me than I had hoped, and I was painfully slow. I was also low on water, and stopped at a couple of small patches of snow to stuff my camelbak with snowballs. I made straight for Eichorn from 100 feet or so down the chute, passing a discouraging number of false summits.

Secor describes the last part of the route as “drop 50 feet to a ledge, traverse to just below the summit, and climb a short 4th-class pitch.” I found nothing of the sort either coming or going, just a maze of blocky fins and gullies followed by a choice of difficult 4th class gullies to the summit. Bob Burd reports a similar experience, so I would be interested to hear from anyone who found this supposed ledge.

I sat down to eat my sandwich, but it didn’t inspire me enough to traverse over to Michael. It was getting late and there was snow on Michael’s north side (which the route traverses), but these were just excuses; I was defeated, and wanted the day to be over quickly. Sadly, this was not to be.

The traverse back to the rock route on Clyde was slow in my drained state, with much panting and muttering of expletives. My first view of the rock route was not encouraging: though part of the face was clean, the top part of the route was still littered with patches of snow. Thankfully the snow was still soft and the meltwater had not yet frozen. I had climbed and descended the route last month, and found it then to be mostly a class 3 mixture of dirt ledges, slabs, and short cracks. However, the snow made the slabs treacherous and hid what lay on the ledges, forcing me to tread extremely carefully. Also, since wet soles have poor traction, edging and smearing became more difficult.

After much unpleasantness, I reached the ledge at the base. Rather than following the ledge south, I managed to take a bit of a shortcut by edging between the glacier and rock to the north, then sliding across the flattest part to the grass, slabs, and talus above the north end of Lake Cecile, where I got more water and got out my headlamp.

I walked quickly down to Ediza, telling a couple of passing climbers about the tricky descent. I ran much of the trail to Shadow, then walked the rest of the trail to Agnew with only 30-40 minutes of headlamp time.

Looking down route up Ken.

Fires and Half Dome

Looking down at the rock route.