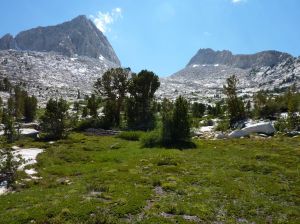 Today’s official peak was Feather, but since I had already climbed it in a 10 hour traverse with Merriam and Royce, I chose to climb Julius Caesar instead. Having already climbed several peaks in the area, I was hard-pressed to find doable bonus peaks. Gabb, Abbot, and Mills were possibilities, but I packed Secor and a map, and put off the decision until after summiting Caesar. Having been cheated of my rest day the day before, I wasn’t quite up for an epic.

I spent half an hour on the summit eating, reading Secor and my map, and looking at the painful distance between me and Gabb. I eventually decided that the 2000-foot climb to Gabb was too much work, and chose instead to climb “Spire Peak” and “Bear Claw Spire,” the two summits guarding Royce Lakes from the east. The former was closest, so after wasting some time trying to contour cross-country, I reached it partway up its supposedly class 4 northeast ridge. In my opinion, the ridge was mostly class 3 with one 5.easy section to get past some huge boulders. I probably could have dropped off the ridge to avoid them, but the climb was fun.

“Spire Peak” has a fun and impressive summit block consisting of two leaning slabs, which can be climbed by stemming up a ways, then moving up a few nice features on the higher of the two. Secor’s class 4-5 rating seems accurate. The register, located on a nearby flat rock, contained Andy Smatko’s original 1969 entry. Bob came up the other side barely five minutes after I had summited, and after eating lunch, we descended the sand-and-rock south face toward Bear Claw Spire.

The west ridge looked loose and nasty, but I managed to find a path on stable boulders and slabs most of the way to the ridge, where I got a good look at the cool summit block. The block is a 15-foot piece of granite, supported by other rocks but with a gap below it, extending over the north face, with its top covered in bird turds. It is a simple class 3-4 climb to the top from the south.

Bob thought we could take a shortcut down a gully on the northeast side of the spire. I was skeptical, but agreed to give it a try. Some cautious 4th class downclimbing later, I was still not sure it didn’t cliff out at the bottom, but I was still making progress. I lost sight of Bob, but continued making my careful way down. Unfortunately, it did cliff out. Fortunately, I was able to make my way through with a bit of low 5th class climbing and careful route-finding. Bob had apparently thought better of his shortcut and chosen a different way. I passed a few challengers on the way down, and finished with Karl in just under 11 hours. Bob finished perhaps 20 minutes later, having found a less steep but less pleasant way off the spire.