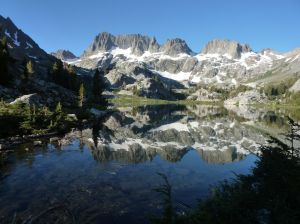 Today’s official peak was Volcanic Ridge. Since I hadn’t climbed anything in the area, I had plenty of alternatives. I first climbed Banner and Ritter the standard way, then dropped down southeast and contoured south, eventually crossing the glacier to climb the rock route on Clyde Minaret. The whole thing took 12h45, and felt like a day from last year’s Challenge.

Bob, always good at coming up with ideas for other people to implement, suggested climbing Clyde Minaret along with Ritter and Banner. Since Ritter and Banner together would make a short day, I thought it would be worth a try. Plus, I have to keep up my 3-peak-a-day average.

JD and I tried to start at 5 AM, but got lost in the parking lots and campgrounds at Agnew Meadows, finally finding the trailhead at 5:15. He set a good pace as we walked along the dusty trail to Shadow Lake, where we got a view of Ritter and Banner at sunrise. Continuing on to Ediza Lake, I mistakenly crossed the log bridge, but found a rock crossing near the lake requiring one daring jump. JD wasn’t up for the jump, so he jogged back to the log bridge while I put on sunscreen.

We passed a large group camping at the upper end of the lake, but didn’t see any other climbers as we made our way toward the Ritter-Banner saddle. The talus here looks bad, but is surprisingly stable. We eventually reached the permanent snowfield and put on crampons, though the snow was probably soft enough to just kick steps on the lower, flatter part. On the steep part, my Kahtoola running shoe crampons were adequate with a bit of careful foot placement, but the layer of slush on top made it hard to get them to bite. Looking back, I saw that JD was sucking wind, and since the rest of the climb was just a cardiovascular slog, I dropped him mercilessly.

After putting the snow gear back on my pack, I cranked up the talus to Banner’s summit, following bits of use trail and slabs where I could. The other sides of the peak are all impressive cliffs, and the summit had good views of Ritter, Lyell, and Thousand Island Lake. I eventually found the ammo box with the register, had a snack, and hopped back down, passing JD on the way.

I probably should have put on crampons for the steep snow to the base of Ritter’s face, but… meh. I was aiming for the classic Muir route, but the whole face is a class 3-4 playground until the last 50 feet, so I romped up the blocky granite to the final summit ramp, legs and lungs burning. I made the summit from the saddle in 35 minutes, which I think is 2000+ vertical feet per hour, and was inordinately pleased. I had some food, signed the brand new register, and headed off down the southeast “glacier” side.

Unfortunately, the glacier is really just a bunch of permanent snowfields, all of them hugely suncupped. A glissade was impossible, and even walking was a nuisance, so I stuck to the talus to either side. From the summit, it looked possible to take a direct, downward traverse to somewhere above Iceberg Lake, saving both time and distance over the trail from Ediza. The upper part was slow going on soft snow and loose rock, but I found grass and slabs farther down, and made better time. However, I ended up dropping almost to the level of Iceberg Lake, so I had to regain a lot of elevation.

From the west side of Iceberg, it was tricker class 2-3 scrambling to the glacier northeast of Clyde Minaret. I made the mistake of not checking my water, and had to stuff snow in my empty camelbak when I ran out above any streams. I kicked steps around a large patch of bare glacial ice, climbed up a dirt gully in the base of the Minaret’s rock, and was surprised to find myself at the start of the rock route, with the direct chimney entrance below and a class 3 gully above. I was too tired at this point to cruise the climb, but it was good to finally do something besides traversing.

The route goes up a chute which opens onto the northeast face next to a large fin. Most of the climbing is class 3, but there are a few class 4 moves, and it becomes more consistently class 4 as it nears the ridge. I reached the ridge at a window between two blocks, with a cliff on the other side and a few of a lake and some peaks to the west. The summit was just to the left, after a short class 4 downclimb that took a bit of thought to figure out.

The summit still had an old 1955 register box — sadly, increasingly rare — along with 3-4 saved register booklets going back to 1987. I finally opened my sardines, and sat enjoying the view while trying to melt the lump of snow in my camelbak. The Minarets are truly spectacular, particularly Michael, an almost cartoonish cone sitting by itself to one side of the ridge. There is supposedly a class 4 route, but it is not obvious.

The descent was straightforward, though I had to backtrack a bit following the ledge across the face and making my way down to Lake Cecile. I spoke to two climbers headed for Clyde Minaret, filled my camelbak with useful, liquid water, and headed for Iceberg Lake. From there it was pure trail to the car, and I jogged when I felt the urge, trying to keep my time under 13 hours.

I reached the trailhead at the same time as the elusive William Nelson, and heard about his epic on Twin Peak. On the first day, he mistook Twin for Matterhorn, and had to bivy in Virginia Canyon, hoping to see some of the Challengers come through the next day. Not seeing anyone, he made his way back to Twin Lakes (I think), luckily getting some food from a Sierra Club group camping along the way. While he gets points for hardiness, he unfortunately gets none for summiting, since he did not return to a trailhead within 24 hours. Still, I doubt anyone will top his epic this year.