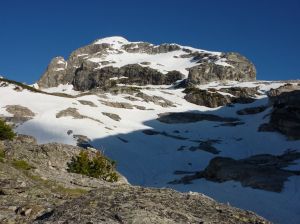 Buck from below Timberline Lake.

Buck is one of the easier Teton peaks, so I chose it as a recon and warm-up climb for some of the more demanding peaks. Still, this being the Tetons, the trailhead is down below 7000 feet, so it’s still a respectable 5100 feet from trailhead to summit.

There is a nice use trail from near the trailhead up to maybe 9500 feet, at which point things get steep and the scree takes over. It would have been nice to have snow down this far, but the snow started closer to Timberline Lake, at around 10,000 feet. I delayed putting on my crampons as long as possible, even cutting a few steps, but eventually gave in, geared up, and moved off across the hard early-morning snow.

I do not recommend the east face route once it has melted out, when it becomes a steep, loose mix of scree and grass. For me it was a consistent snow climb, up to maybe 45 degrees — just a grind at VO2-max. Though I downclimbed some parts facing in, it wasn’t especially treacherous, even with my running shoe crampons.

There was unfortunately no summit register — I think they may have stopped keeping them here in the 80s — but the views north to the Grand and other high peaks were well worth the climb. The climb took me almost exactly 3 hours, once again proving that I climb a wide variety of terrain at 1700 feet per hour.

I thought of crossing over Static (11,300) to catch the trail, but the ridge between the two peaks is fairly sharp on both sides, and there’s a large vertical step on the way down from Buck. The easiest way between the two peaks would probably be to drop to Timberline Lake and circle around to the east. I decided to save my energy for another day, and also to look for the glove I had dropped (I found it). I jogged some of the trail back to keep my time under 5h30, and called it a day.

Looking north to the Grand and other high peaks.

Looking north along the slope.

Buck from below Timberline Lake.