After a break to remind myself that I am a really bad mountain biker, better off running and pushing the bike on anything remotely technical, it was back to Aspen to finish of the Elk range 14ers. 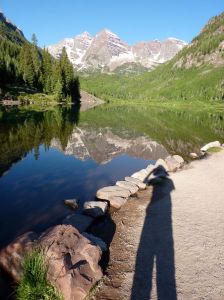 After hiking all around them, I finally got around to climbing these iconic, notorious peaks. My golden eagle pass got me into the Maroon area for free and, it being a weeknight, I managed to find an unreserved campsite a few miles from the trailhead. I had to move once, when some jerk pounded on my window and claimed to have reserved the first site I chose (it wasn’t marked), but I moved to another free spot and wasn’t pestered.

On the long hike south past the Bells, I noticed that the snow in the couloirs was still climbable, and was tempted to try the Bell Cord, but opted for the standard route. This route leaves the valley trail and immediately climbs nearly 3000 feet straight up a rocky, grassy slope to South Maroon’s southeast ridge. This part was a grind, but an efficient way to gain altitude.

From the ridge, South Maroon is surprisingly far away across rugged, loose terrain. I stayed mostly to the west of the ridge, following cairns and bits of trail across mostly loose class 2 terrain with some class 3 moves. One gully along the standard route was still full of steep snow, so I climbed the class 3 rock to one side. I reached the summit without issues, and found a few scraps of paper instead of an actual register. I spotted two climbers on North Maroon as I set off on the intimidating ridge between the peaks. The descent to the saddle is not particularly exposed, but it is slow going, with lots of loose rock and slick, sloping slabs.

After passing the top of the Bell Cord, the climbing gets faster but more involved, with the first of two short 4th-class pitches. The route description I had printed suggested staying to the right or on top of the ridge, but occasional cairns marked a route that stayed to the left for the first part. As I neared North Maroon, the rock changed from the friable gray stuff of South Maroon to harder purple stuff, and the climbing improved.

As usual, I couldn’t describe my route (“whatever works” seems to be the best beta for these things), but I generally stayed near the top of the ridge, as there aren’t many large pinnacles to avoid. After a second short pitch of 4th or easy 5th-class climbing, which I’m glad I wasn’t going down, steady 3rd-class got me to the summit, with an actual register.

While there was some snow on the descent, there wasn’t enough to require the crampons and axe I brought. I passed one party making its way up a short 4th-class pitch, then caught the party I had seen on the summit (a guide and client) where the route left the ridge to follow a gully on the peaks northeast side. There were cairns and signs of use on both sides of the ridge, so we arbitrarily chose to head left, which turned out to be the wrong way. A short 5th-class downclimb and some steep, loose scrambling got me back on route, while the guide and client took their time making use of a rappel setup someone had left.

I slowly descended the insanely-steep trail, which made its way around to the north side as it descended, crossed some boulderfields, suffered through a bit of 3rd-class moss, forded a small stream, and finally reached the Maroon-Snowmass trail somewhat the worse for wear. From here it was an easy, hot trail cruise back to the car. The climbing is not that fun — mostly loose, annoying talus or steep grass — but the ridge is spectacular enough to make it worth the trouble. 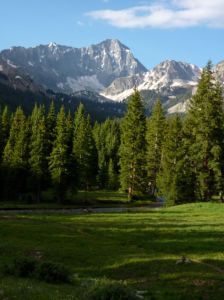 Capitol from near the ditch trail junction.

So much for the dry season. After weeks of beautiful weather, Colorado’s thunderstorms seem to have started today. Unfortunately, this coincided with another long-for-Colorado day in the Elks. The standard route on Capitol is an extended class 3 ridge, a bad place to be if the weather goes bad, so the change of season was not appreciated.

My campsite near the trailhead was probably one of the most beautiful so far this summer. Looking south from an aspen grove, the top part of Capitol’s 2300-foot north face is visible behind one side of the Capitol Creek drainage. I got a “lazy alpine start” at 6:30, taking the recommended ditch trail, which follows an irrigation ditch (hence a consistent, moderate grade) along the west side of Capitol Creek before climbing over a ridge and down to the creek, where it joins the older creek trail on the creek’s east side.

The trail simply fords the creek, but I wasted some time exploring upstream, and found a way to cross without getting my feet wet, though it required one desperate running leap. The trail below the lake was a mess, with downed timber, slush drifts, and bogs making it difficult to follow. I took the least-worst path through the woods, then found the trail again just below the lake.

Capitol Lake is yet another spectacular Elks lake, sitting at the base of Capitol’s imposing north face, and still partly covered in melting snow. From just northeast of the lake, a well-constructed trail switchbacks up the obvious grassy slope to a saddle northeast of Capitol. At the top of the switchbacks, the standard summer route evidently climbs the talus-infest northeast slope of “K2,” but I chose to climb the class 3 ridge directly. Shortly after starting up the ridge around 9:50, I passed a shirtless climber on his way down. Either he got a very early start, or he was impressively fast, since climbing from saddle to summit and back took me almost three hours.

After finally reaching “K2,” I was impatient to reach the summit, but the final section is frustratingly slow. The famous knife-edge was fun and not at all dangerous — there are always good footholds on one side or the other, and the exposure is modest. While it is longer, it is nowhere near as wild as the knife-edge off of Polemonium. The crux is probably the meandering, rising traverse across Capitol’s southeast face, which consists of alternating class 3 rock and loose talus.

I reached the summit about 4h45 from the trailhead and, mindful of the approaching clouds, signed the register, took a picture of the bedraggled American flag, crammed down a snack, and headed back down the ridge. I heard a bit of thunder after crossing “K2,” but was lucky enough not to be rained on except for a brief sprinkle well below the lake.

For variety’s sake, and to postpone or possibly avoid fording the creek, I took the creek trail on the way back. Unfortunately the bridge seems to have been recently washed out, so I had to endure 10 seconds of knee-deep water in the last mile.

Someone on 14ers.com claimed there was enough snow on the ridge on 6/24 to make it hazardous, so I packed my ice axe and crampons. It turned out to be trivial to skirt the steep snowfields on talus and class 3 rock, and my axe remained on my pack as a lightning rod.

This supports my impression that 14ers.com is for friendly people who enjoy mountains and want to climb Colorado’s 14ers, but lack the mountaineer’s combination of caution, inventiveness, and drive. It’s like the difference between following a recipe and experimenting with food. While the 14ers.com route for Capitol runs to several paragraphs, the route description I printed out is all of 94 words, and can be summarized as: “Get to ‘K2.’ Descend the north side to reach the ridge. Cross the flat section, then traverse across Capitol’s face until you can climb to the ridge.”

Part of the pleasure of mountaineering lies in figuring out a route to the top that is within your ability. Following a peak’s “recipe” may get you to the summit, but it won’t make you better at climbing mountains.

Bridge out on the Capitol Creek trail.

Rain back near the trailhead.

Capitol from the start of the knife-edge.

Capitol from near the ditch trail junction.

Short catwalk on the ridge.

One of the short 4th-class pitches.

North Maroon and the ridge from South Maroon.