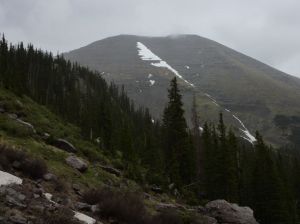 Humboldt from the south.

It had to happen eventually: the weather, up to now uncannily clear and sunny, finally turned ugly.

I decided to turn south for the Blanca region, home to 5 unclimbed 14ers, since they should have melted out more than the other motherlode in the Aspen area. Given the tough day on Pikes, I opted to start with Humboldt, a bland anthill across from the Crestones. The town in this area, Westcliffe, is peculiar. It has very little cell phone coverage (the waiter at the Mexican restaurant claims T-Mobile, of all things, works, but there is no Verizon), but it has free wireless (people aren’t big on password-protecting their home networks). The only chain food is a Subway in a gas station, but Edwardo’s, the Mexican place downtown, is cheap, decent, and friendly.

I drove up to the newly-bulldozed South Colony Lakes trailhead, 2.5 miles below the old one, and found a few cars and a nice flat spot to park and sleep. Leaving my house around 6, I was disappointed to see that it was already cloudy and looked like rain. The clouds didn’t do much, though, and I optimistically assumed that they would either continue their forbearance, or clear out before the usual afternoon thunderstorms.

Crestone Needle, from near the old trailhead.

I passed one group going up and one turning back on my way to Humboldt, and caught a few glimpses of Crestone Needle through the clouds. Other than a few corn-snow flurries, the weather held as I crossed solid patches of snow and climbed the well-maintained trail to Humboldt’s west ridge.

The well-maintained trail turned into a use trail there, but was still easy to follow. Along the way I saw at about 50 yards what might have been a gray fox (too gray, thick-tailed, and smooth-running to be a marmot), but it was too far away and too shy for me to get a picture. The snow flurries picked up as I approached the summit, which had two surprises: an actual register, and a small cliff on the other side.

Blizzard on the summit.

As the flurries turned into a blizzard, I had a quick snack and headed back down. The two groups I had passed were still stolidly climbing as I descended. The snow turned to corn and then misty rain, and between hitting wet brush and sticking my foot in a creek, I was thoroughly wet by the time I returned home. The forecast calls for more of the same tomorrow.

Crestone Needle, from near the old trailhead.

Blizzard on the summit.

Humboldt from the south.

Movie theater, next to theater.

One of numerous planters along Main St.