I gather this is a low snow year, which means things are generally dry below maybe 11k feet, some mixture of mud bogs and slush drifts between there and tree line, and clear except for couloirs and some bowls above that. Unfortunately, this often means that climbing from 10k to 14k is a walk, followed by a slog through mud, slush, and downed trees (perhaps because of the mud), followed by whatever counts as ground above treeline. Since we’re in the Sawatch, that often means scree. Anyways, I bit the bullet and ticked off Yale and Columbia these past two days, bringing the wrong equipment for both.

Things are melting quickly, and lots of routes will probably be slush-free below tree line in another week or two: 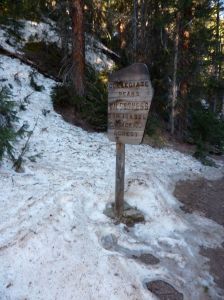 Saturday I got off to a late start, feeling a bit off, and made the long climb from the Silver Creek trailhead to Yale’s saddle. I wasn’t sure how far I would go, so I went with runners and no snowshoes. This is a killer trail, with the first part being a relentless grind up a south-facing slope to just below the creek crossing. If you climb Yale in the summer, I suggest coming from another direction. This time of year, however, the hard part started after the creek. 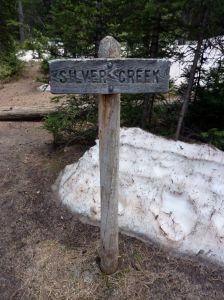 Especially once the slope steepened, the flowing bog beneath slush drifts was somewhat trying, but… you do what you have to. 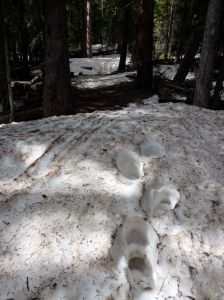 From the turnoff to Yale, the ridge seemed interminable, with entirely too many false summits, but the rock was mostly stable, the snow mostly hard enough; there were even a few moves of “Colorado class 3” to keep things interesting.

Interminable ridge starts at the left-hand saddle. Summit at right.

Once again the summit register was either missing or covered by snow; rather than digging for it, I found a place out of the wind and had a snack. As I turned to leave, I met a fellow bum (though more respectable) who had come up the east side. We chatted, exchanged contact info, and headed our separate ways. Other than him, I saw a young woman in capri pants climbing Yale, and several backpackers, many wearing hiking sandals. It’s not the crowd I expected, but maybe the calendar saying “spring” keeps all but the locals away.

Having tasted the slush, I went for boots and snowshoes, only to find the dramatic melting shown above, and a nice boot track where snow remained. Excellent Colorado signage directed me toward Columbia, where I caught two hikers at treeline.

I stashed my snowshoes, then followed them up the scree slope, trying to find the path of least resistance. 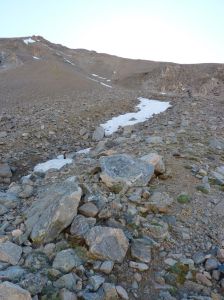 I’m used to passing people on this kind of terrain, but I was surprised to find myself almost unable to hang with them. Probably because they knew where the use trail is, they headed right partway up — away from the summit, but toward the ridge — while I continued straight ahead. It got steeper and somewhat worse, but the areas of larger rocks were mostly stable. I came out on the ridge maybe 100 yards ahead of my companions despite feeling thoroughly worked, showing that even in three dimensions, the shortest distance between two points is a straight line.

Easy travel along the ridge.

From there it was a painless jaunt across a few false summits to the true one, where I met a couple (and their hardy 6-pound rat-dog) who had apparently started from camp somewhere. No register again, but that’s expected.

Since it was warm and windless, the five of us hung out on the summit for most of an hour, then politely separated for the way down. I may have had to cut corners on the way up, but I was honestly faster descending scree, this time making some use of the trail. 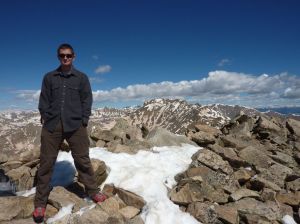 Obligatory summit shot, with Harvard behind.